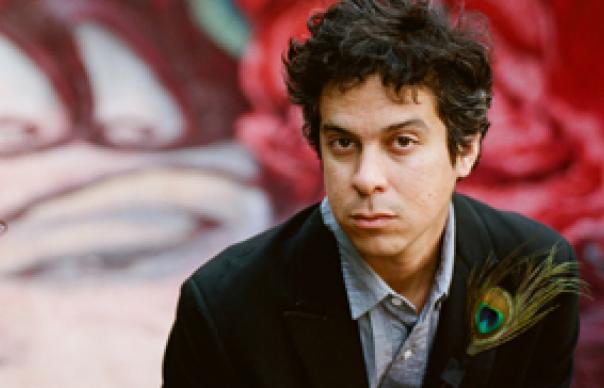 When Matt Ward released his first solo album, Duet For Guitars #2 in 1999, he appeared to be another bedroom hermit with a four-track recorder, inhabiting his private universe on the margins of indie. But through the course of the ’00s, the Portland, Oregon, native has progressively shown himself to be multitalented, popping up all over as guest musician and general creative go-to-guy.

His accomplishments are many. Touring and recording with the comparably ambitious Conor Oberst. Co-producing and playing guitar on Rabbit Fur Coat, the first album of Rilo Kiley’s Jenny Lewis. Forming She & Him with actress/singer Zooey Deschanel and concocting 2008’s soft-rock homage, Volume One. Not to mention making significant contributions to the records of artists ranging from Cat Power to Beth Orton and Norah Jones.

Meanwhile, Ward’s own albums have incrementally expanded on the artist’s lo-fi roots, which put him alongside such fingerpicking solipsists as the Mountain Goats’ John Darnielle, Smog’s Bill Callahan, Will Oldham and fellow Portlander Elliott Smith. His studio output, which now stands at six LPs, reveals him as a virtuoso guitarist and expressive singer, a passionate conservator of American roots music and a purveyor of Big Themes. All that is special about Ward is encapsulated in the captivating “Chinese Translation” from 2006’s Post-War, an epic metaphysical parable enclosed in a lilting alt.country song, embedding poetic verbiage about the cycle of life into a playful arrangement.

The heady and ambitious Hold Time finds him delving deeper into the sounds and themes of Post-War and “Chinese Translation”. The album will be perceived by some as a religious tract because its rich Biblical imagery and intimations of immortality – and yes, he does thank God in his acknowledgments. But Hold Time is not an album-long testimony of belief; instead, it plays out as an extended meditation on the preciousness of time, the dance of life and death, and what evidence man can perceive of a spiritual dimension in the physical universe.

After hushed opener “For Beginners”, the first of several contemplations of sin and salvation, Ward wastes no time connecting divine love with its human corollary. On “Nobody Like You”, he describes the redemptive power of true love via a lyric that mixes the language of traditional songs (“I trusted liars and thieves in my blindness”) and Motown (“But now it’s just like ABC/Life’s just like 1…2…3”), in a finger-snappin’ arrangement à la Dave Edmunds.

Then comes the sprightly, string-enhanced shuffle “Jailbird”, the final minutes of a condemned man – one human who knows precisely when the life will go out of his body, which is what interests Ward in the subject. The words he puts in the mouth of his dead man walking directly address the album’s prevailing theme: “Save my soul ’fore they lay my old body down.”
It’s easy to get lost in Ward’s lyrics, but this artist’s thematic concerns can’t be separated from his sonic impulses, which deftly draw on the hand-made sounds of Appalachian music, country blues, clapboard-church gospel and early rock’n’roll. At the same time, the album has all the lo-fi signifiers, from Ward’s imperfectly doubled lead vocals to the gauze of reverb he throws over the tracks. But these intimate elements co-exist with the most expansive arrangements of Ward’s career.

The album’s leitmotif is its lush, dreamy string sections, which bring a gorgeous poignancy not only to the metaphysical songs “For Beginners”, “Hold Time”, “Save Me”, “Fisher Of Men” and “Epistemology”, but also to his radical reworkings of a pair of ’50s rockers, Buddy Holly’s “Rave On” (a duet with Deschanel) and Don Gibson’s “Oh Lonesome Me” (with Lucinda Williams). A third cover closes the album; it’s the Sinatra ballad “I’m a Fool To Want You”, with Ward transforming it into the end-title theme for an imaginary Spaghetti Western that doubles as a wordless hymn. “I have a lot of questions about that relationship between love and death,” Ward said in 2003. He’s pondering those questions in earnest now.

Your arrangements are lusher than ever, and yet you’ve retained your trademark lo-fi character.

Growing up with making so many four-track tapes, that sound is forever in my head. Production-wise, I wanted a balance between rich string sounds and thin pawn-shop sounds.

What prompted the Buddy Holly and Don Gibson covers?

The short answer is that I’ve loved those songs as long as I’ve loved any song. The long answer is that I’d like to erase any kind of timeframe on these records I’m making. I like it when I hear a song on the radio and I don’t know how old it is, or where sounds are coming from.

It’s inspired by being asked where my inspiration comes from. It’s the hardest question in the world, so I decided to make a record that tried to answer it. I like stories and songs that raise questions instead of pretending to have all the answers. There’s not many elements of life that can take you to those areas – but music can.