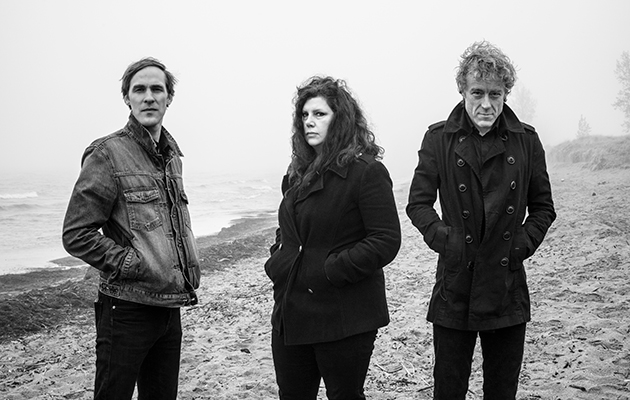 The first sixteen minutes of Double Negative — essentially the first three songs — contain some of the most bracing music Low has ever made. “Quorum” opens the album with a blast of distortion, which coagulates into rhythmic, vertiginous waves. When Alan Sparhawk and Mimi Parker begin to sing, their voices are distorted and scrambled, yet their harmonies remain oddly intact, even catchy. Everything sounds distressed, and scarred, raw like an exposed nerve. As that song melts into “Dancing & Blood”, the commotion morphs into a strange, insistent beat, like a pounding heart or a timer counting down to some awful event. Parker’s voice rises above it all, barely escaping the mire, giving the album its first human-sounding moment before the song is overtaken with static. It’s hard to tell if “Fly”, the third panel in this triptych, is sinking or soaring. “Take my weary bones and fly,” Parker sings, as Steve Garrington’s bassline tethers her to her troubles.

By so thoroughly complicating their sound on these three opening tracks, Low manage the impressive feat of wresting beauty and grace from ugliness and abrasion. Especially for a band with twenty-five years behind them, such a change in sound and approach can be risky, but in this case it pays off and then some, as once again Low show how limitations can actually be freeing.

Once standard bearers for the nebulously defined slowcore movement of the 1990s—which included Red House Painters, Ida, Codeine, Bedhead, and others—they have always specialized in glacially paced songs, midtempo even at their most rushed, that push Sparhawk and Parker’s wedded harmonies to the forefront. At least in the twenty-first century, Low have worked to explore all new territory, working with different producers (Jeff Tweedy, Dave Fridmann, Matt Beckley) to wring new sounds out of their set-up. But Double Negative is their biggest step forward to date, an album that scrambles their sound completely; it sounds nothing like Low and everything like Low. More than that, it captures what it means to be alive in 2018, when developments in technology create rather than alleviate suffering, when each day seems to present a fresh new hell, when it takes immense will power to maintain equilibrium and hope.

As they did on 2015’s Ones & Sixes, Low traveled down to Eau Claire, Wisconsin, to work at Justin Vernon’s April Base studio with producer B.J. Burton (Bon Iver, Francis & the Lights). Rather than bring finished songs, the trio took mostly sketches and fragments, which became the foundations for these intense experimentations and elaborations. Remarkably, the fragments remained fragments. The songs on Double Negative never move in expected ways: There’s nothing that you’d really call a chorus or a bridge, just melodic passages that sometimes repeat and often do not. Songs fade out before the track ends, or they bleed into each other, or they just dissipate into the air. Disarticulated and discombobulating, the album never lets you get comfortable, never offers anything like solid ground.

In that regard, Double Negative is comparable in sound and execution to Bon Iver’s 22, A Million, another album that distressed what had become a familiar aesthetic. But perhaps the album it most resembles—in execution and dread-laden mood if not necessarily in sound—is Radiohead’s Kid A. Shattering expectations about how they should sound and what they should do, Low gather up sounds on pop’s fringes and foist them just a little closer to the mainstream. And just as Kid A reflected a very particular millennial jitteriness, Double Negative captures something very specific to 2018, even if Sparhawk and Parker sound warmer and more human than Thom Yorke ever did.

Low have never made a record quite so jarring and jagged, but Double Negative pushes beyond their own catalog. Despite 25 years together, despite being one of those bands (like Yo La Tengo or Lambchop or Cowboy Junkies) that has managed to write a long story for themselves with no breakups, no reunions, no major lineup changes, despite being a band often taken for granted, Low have made what might be their most relevant album, one that holds a mirror up to the world.

It’s not the first time they’ve tried; thirteen years ago, they recorded the heavy, strident Drums and Guns, inspired by the War in Iraq, but what makes Double Negative so powerful is the way these themes of alienation, isolation, and overwhelming anxiety inform the music as well as the lyrics. “Saw you at the grocery store, I know I should have walked over and said hello,” Sparhawk sings on “Always Trying to Work It Out,” and it’s one of the few times when they lyrics are immediately legible. And that mundane setting—that “grocery store”—jostles you a bit, reminds you these songs are set in an all too real world. Low conjure that particular anxiety in the lurching, coughing beat, the fragments of warped guitar, the woozy drone, but especially in Sparhawk’s manipulated vocals, which bend and balloon dysmorphically.

This is not a political album exactly; rather, it’s about living at the fraying edge of sanity. Politics is very much a part of that. “My body like a soldier,” Parker sings on “Fly.” “You gotta tell me when it’s over.” But the questions they seem to be asking here, the idea they’re exploring in both the lyrics and the sounds, are much more general: What is the psychological and emotional toll of living in such a tensed state? And how do we move beyond it? How do we heal? “Rome (Always in the Dark),” referring to another fallen empire, offers the most specific answer, a motivating mantra: “Before it falls into total disarray,” Sparhawk and Parker chant together, “you’ll have to learn to live a different way.”

Every song but especially that one sounds strained almost to its breaking point. “Tempest” could have been recorded in a burning studio. “The Sun, the Son” entertains nearly a full minute of silence before gradually mushrooming into a dank drone. “Dancing & Fire” manipulates Sparhawk’s guitar until it sounds more like the distant memory of a guitar than an actual instrument. Here Low’s signature slow pace suits the material, as though they’re forcing you to live in these ugly/beautiful moments, to inhabit these anxieties fully.

And yet, for all its wrenching worries, for all its paranoia and discomfort, for all its din and distortion, Double Negative is never merely cynical. What makes this experiment so poignant and so wildly compelling is the band’s steadfast belief that music can uniquely assess the times in which we live, that it can confront our greatest horrors and put something like a name to nameless fears. Perhaps the most powerful and optimistic moment on Double Negative comes on “Always Up,” when Parker’s voice quietly breaks through the chaos like the sun through storm clouds: “I believe I believe I believe… I can see I can see I can see.” It’s a brief respite from all the tension they have created, which suggests that for these indie rock veterans, making music is a means of illuminating the dark, a sustaining and radical act, and one that is absolutely necessary for survival.