Let The Right One In

A teen vampire movie that strips away the cliches. It's exceptional. 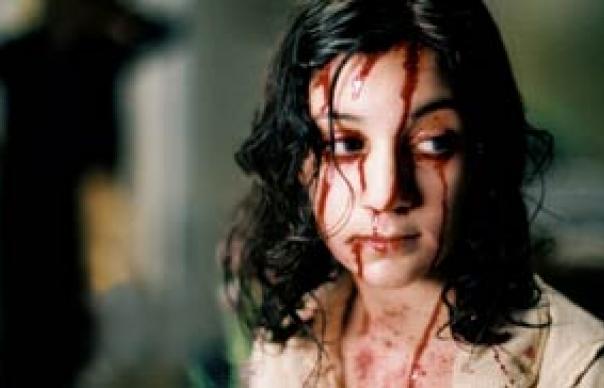 As we have been reminded repeatedly over the last few years, there’s plenty of life in the undead yet. In cinemas, you may have seen 30 Days Of Night, I Am Legend or James Corden and Matthew Horne’s Lesbian Vampire Killers; on television, we’ve had BBC Three’s Being Human and HBO’s True Blood.

The most successful recent vampire outing, though, is the Twilight movie, which made an international star out of British actor Robert Pattinson and has so far grossed over US$400 million worldwide at the box office. Twilight is a Hollywood teen vampire romance – like a Gothy 90210, heavy on the emo angst. A similar set-up featuring the relationship between a young human and a vampire can be found in Let The Right One In, by Swedish filmmaker Tomas Alfredson; but Alfredson succeeds far more successfully in tackling the loneliness, longing and compassion of adolescence than Twilight’s glossy high school fantasy romance ever could.

Set during the winter of 1982 in Blackeberg, a glum dormitory town on the outskirts of Stockholm, Let The Right One In is based on the debut novel by John Ajvide Lindqvist, a massive Morrissey fan, who riffs on a Viva Hate-era track, “Let The Right One Slip In”, for his book’s title. And that, you might think, is not the only inspiration Lindqvist has taken from his hero.

Like Morrissey, Lindqvist builds an unlikely romantic scenario that he lets play out against a run-down urban landscape; between 12 year-old school-boy Oskar (Kåre Hedebrant) and Eli (Lina Leandersson), a girl who’s recently moved into the housing estate where Oskar lives with his single mother. Oskar is pretty and spectrally pale with a thatch of blonde-white hair. Shy and withdrawn, he’s bullied at school but doesn’t fight back. But at home, in his bedroom and the apartment block’s courtyard, he devises violent revenge fantasies against the bullies.

Eli herself is a pretty extraordinary figure; waif-like and feral, with a thick tangle of black hair, and dark expressive eyes who’s “been 12 for a very long time.” She is capable of both world-weary acquiescence and gawky tween naïvety. In one scene, her face smeared with gobbets of blood, she climbs into bed with Oskar. She tells him not to look at her, and as they lie together back to back in the dark, he tells her he wants them to go steady. “Do you do anything special when you go steady?” she has to ask.

Tellingly, perhaps, most of the adults we see in Let The Right One In are hardened drinkers; you can’t imagine there’s much fun to be had in Alfredson’s version of Blackeberg that doesn’t involve a bottle or two. It’s an astonishing contrast to the traditional setting for vampire stories. Think of Dracula’s castle, Lestat’s fin-de-siecle New Orleans in The Vampire Chronicles or the Eighties’ neon-cool of The Lost Boys’ LA; vampires just aren’t supposed to rock up in somewhere like Blackeberg. And, you might argue, that it’s precisely this sense of something extraordinary taking place in such a humdrum town that helps make Let The Right One In so remarkable.

Certainly, it also means the flashes of violence are extremely shocking when they come. Alfredson uses a palette so almost entirely drained of warm colours that blood look like oil; thick, black and gloopy. But of course, as you’ve probably gathered, it would be disingenuous to suggest that this is a straightforward genre film; shear away the vampire aspect and you have a tender and surprisingly human story of two people united through mutual yearning and solitude. Both Hedebrant and Leandersson are excellent, with Leandersson conspicuously acting beyond her 11 years. Incidentally, their casting was the result of a year-long search all over Sweden. A unnecessary Hollywood remake looms – from Cloverfield director Matt Reeves. This, though, is an exceptional film.