LADIES AND GENTLEMEN THE ROLLING STONES 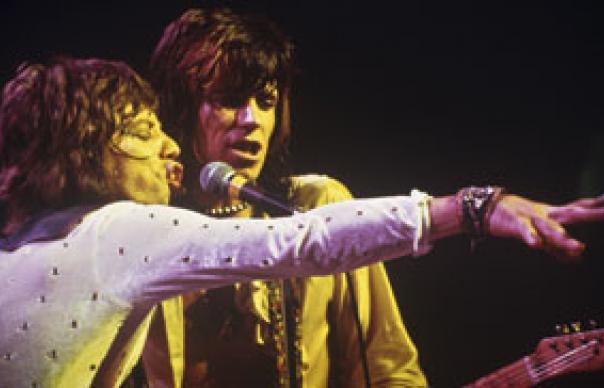 When Ladies And Gentlemen The Rolling Stones opened at New York’s Ziegfeld theatre in 1974, there was pandemonium. Promoters of the film, a live document composed of four performances from the southern leg of the Stones’ ’72 American tour, had organised a street fair. There were to be jugglers, acrobats, a New Orleans band. Vendors would sell multi-coloured produce. There would be a motorcade of limos, the last of which, covered in rubber ducks, would disgorge Mick Jagger.

If it sounds like a fantasy, that is exactly what it became. The street fair, for want of permits, never happened. The promised limos, much like the Stones, didn’t materialise (though Todd Rundgren did). And the subsequent history of Ladies And Gentlemen… has gone on in much the same fashion since: confused.

Certainly, this is a film about which no-one seems to be able to get their story straight – but the main plot details run as follows. When he was assigned the task of documenting the tour, photographer/film-maker Robert Frank had no appetite for recording concert footage, and so commissioned out the work. Staying within the community of underground film-makers to which he and his co-filmmaker Daniel Seymour belonged, Frank chose Steve Gebhardt, a veteran of off-the-wall film-making with among others, John Lennon and Yoko Ono, to do the filming. Roland Binzer, an ad man, directed the finished piece.

At the time of the ’72 tour, it seemed all parties were working on one film, a work where Frank’s candid backstage footage and the live shows caught by Gebhardt would seamlessly join. What in fact happened was a parting of the ways: Frank and Seymour keeping the faith with their version of events (thus starting the still-rumbling saga of their beautiful, freewheeling documentary Cocksucker Blues). By way of a salvage job, meanwhile, the live footage found life as Ladies And Gentlemen: The Rolling Stones.

The plan was to create a “virtual concert experience” – even to the extent of the film, and the complex quad sound rig it required, itself going on tour in 1974. Keith Richards, apparently, worked closely with the film-makers to create an authentic quadraphonic sound (which is still, in its 5.1 rendering here, excellent). Jagger, however, seemed to have lost interest in the venture, and without his momentum behind it, the project vanished from view – it was last available on VHS, in Australia, sometime in the early 1980s.

For this substantial DVD release, Jagger has worked up some enthusiasm. There he is in the DVD extras, having a brief chat to introduce the film, albeit preferring to talk about the subsequent, 1975 Stones tour of the USA – though he does say he quite liked Chip Monck’s lighting design for the 1972 tour. He’s not much more candid in a 1972 interview from The Old Grey Whistle Test (also included), but does reveal to Richard Williams that he’s not enormously concerned about the threat to the Stones’ pre-eminence being led by T.Rex. This thoughtfully-compiled package even has footage of the Stones rehearsing for the 1972 tour in a Swiss cinema .

If the pedestrian fixed camera footage means this is not exactly for the casual viewer, for the Stones freak, Ladies And Gentlemen is fantastic stuff. It is, after all, the only official document of the full Exile band, Bobby Keys, Nicky Hopkins, Jim Price et al, in session. And it does give you an inkling what seeing that band might have been like. In his 2010 interview, Jagger says he feared the Stones were sometimes a “sloppy” band – but had been relieved to learn they weren’t always so.

Ladies And Gentlemen… supports that view: from the opening “Brown Sugar” through “Bitch”, “Love In Vain” and “Sweet Virginia” the band are tight but loose, utterly in their element. The view extends to the wider picture, too. Though this was a promotional tour for Exile, and behind the scenes marked the debut of a hugely efficient touring machine, the set never seems geared to “plug” the new album, the explicit drama of the band’s 1969 concerts having evolved to a more intuitively swinging show.

Ultimately, if Cocksucker Blues supplies the view of life behind the velvet rope, Ladies and Gentlemen supplies the below-stairs view of the Stones in 1972. This is the popcorn experience, the view of the T-shirt buyer, the $7 ticket holder. As the house lights go up, and Chip Monck announces “we’re through” there begins the sound of a Spitfire’s engines starting. A nod, perhaps, to the band’s private jet. Or maybe to the nature of the touring life itself. Per Ardua Ad Astra, you could say.