There’s been a lot of excitement around the office over the last couple of weeks, with the imminent arrival of the first David Bowie album since what seems like the end of rationing causing a certain giddiness in the Uncut ranks, followed by the actual release of the long-promised new My Bloody Valentine album, a mere 22 years after Loveless. 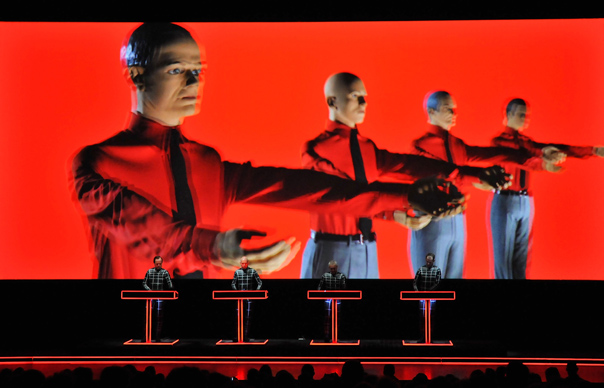 There’s been a lot of excitement around the office over the last couple of weeks, with the imminent arrival of the first David Bowie album since what seems like the end of rationing causing a certain giddiness in the Uncut ranks, followed by the actual release of the long-promised new My Bloody Valentine album, a mere 22 years after Loveless.

Then of course Kraftwerk have been at the Tate Modern, which is just a stroll towards the Thames from where we are currently hunched at workstations in our editorial hub, hard at work, as anyone can see, on the next issue. Most of the office has by now been to see at least one of these historic performances, most recently Michael, who went last night. From what he’s just been telling me, there was a degree of audience participation that I’m not sure is typical of Kraftwerk shows, which I am inclined to imagine are attended by many serious types, whose absorbed attention to what they are listening to is respectful to the point of dutiful reverence.

I can’t imagine, for instance, that noisy hecklers are frequently in attendance when Kraftwerk play. But Michael reports that last night a group of what he thought were, as he described them, “Brummies”, at one point took to chanting “Ralfie, Ralfie, show us your chin,” at Ralf Hutter, before shouting for “Numbers” at every opportunity.

There were a couple of stage invaders, too, which I am even more sure is not usually a part of the Kraftwerk live experience. The first apparently bore a more than striking resemblance to Vod, from Fresh Meat, to the extent Michael wondered if the Fresh Meat team weren’t guerrilla film-making for a new series. She had what Michael says was a “proper dance” – he didn’t go into any greater detail, so I’m not entirely sure what this may have entailed – unlike the blonde gal who hopped onto the stage and just sort of, I’m told, “wibbled around a bit self-consciously” before disappearing back into the crowd.

Of course, there are some shows where such behaviour would be received with stern disapproval and the intervention of burly security men in combat trousers and zipped-up nylon jackets, the kind with pockets on the sleeves, multiple pouches for who knows what. The idea of bouncers at a Kraftwerk seems when you think about it is a bit far-fetched, however, and so it was perhaps no surprise when neither the Vod-lookalike or the wibbling blonde were in a manner too unseemly for the occasion dragged kicking and bleating from the stage.

From the imposing splendour of Tate Modern’s Turbine Hall, we now turn to the rather more modest surroundings of The Railway, in Winchester, which for the last couple of years has been hosting the Uncut Sessions, similar to the Club Uncut shows we used to put on at London’s Borderline. Oliver Gray, who promotes the gigs there, has just been in touch with the line-up for his next series of shows, which starts on February 22 with an appearance by Robert Vincent, “the Scouse Springsteen”, according to one admirer, whose album Life In Easy Steps has enjoyed a lot of recent rave reviews. He’ll be supported by Jack Day, whose Bucketfull Of Brains album, The First Ten, is definitely worth looking out for.

Arbouretum, whose new Thrill Jockey album, Coming Out Of The Fog, is also highly recommended, play next, on February 25, and are followed by The Coal Porters, with Dave Harding from Richmond Fontaine, on March 9, Chuck Prophet And The Mission Express, who play The Cellar in Southampton as part of the season on April 29. Canadian country-rockers The Deep Dark Woods are on at The Railway on May 3, as are Hurray For The Riff Raff on May 11 and Italian roots rocker Stiv Cantarelli is there on May 30. Cantrelli’s last album, Innerstate, featured Richmond Fontaine as his backing band, but at The Railway he’ll be appearing with The Silent Strangers, basically the rhythm section from Stiv’s former band, Satellite.

Tickets for the Uncut Sessions are available from www.railwaylive.co.uk