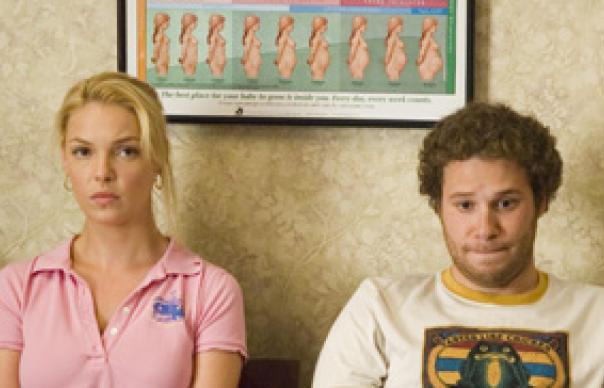 What happens if the father of your baby is someone you normally wouldn’t look at twice? There’s an easy answer to that – “it rhymes with shmahmortion”, as someone delicately puts it; or there’s trying to make the best of it. I think we can agree the second option has greater comic potential, even if a sentimental fade-out is pretty much a given.

On the face of it, this is just another high-concept romantic comedy, albeit with more belly laughs than most. But this summer’s US sleeper makes it two home runs on the bounce for The 40 Year Old Virgin writer-director-producer Judd Apatow, who must now be counted a cultural force to be reckoned with. And just as Virgin made a star out of Steve Carell, Knocked Up introduces a new comedy hero in the portly shape of 25-year-old Canadian Seth Rogen.

An amiable, hairy, beer-bellied slob, Rogen has been enlivening the margins for a few years – but unless you’re an avid fan of Anchorman and The 40 Year Old Virgin you’re unlikely to know the name or recognise the face. In the US, his biggest claim to fame had been supporting roles in two short-lived sitcoms from the Apatow production line – Freaks And Geeks and Undeclared – both cancelled in their prime, but hip, funny cult items set in high school and college, respectively.

It’s easy to see Knocked Up as the latest installment in Rogen’s sentimental education – not least because several more graduates from these shows also feature. Jay Baruchel, Jason Segel and Martin Starr play Ben’s house-mates: stoners and slackers who refuse to admit their student loan days are over.

Pretty, goal-oriented blonde Alison (Katherine Heigl, from Grey’s Anatomy) is hardly the type to be attracted to Ben, but we can understand what he sees in her. And he’s funny, which goes a long way.
If this odd couple routine is a tad obvious, you might think gags about obstetricians and epidurals have been done to death over the years. But Apatow likes these people too much to let them stay caricatures – we do, too – and don’t underestimate his knack for spreading zingers left, right and centre. Even the most hackneyed set-ups get a boost from his taste for vulgar mischief (two candid sex scenes are standouts). In this movie – as in The 40 Year Old Virgin – you can sense the American Pie generation growing up and settling down; but they’re definitely not going without a fight.

A lot of the juiciest stuff here comes from the extreme contrast between Ben’s buddies (haphazardly applying themselves to cataloguing movie star nudity for an internet start-up) and Alison’s uptight sister, Debbie, and unhappy husband, Pete (Apatow’s wife, Leslie Mann, and Paul Rudd), whose marital woes don’t auger well for the expectant couple.
At 39, and with two kids of his own, Apatow’s own sympathies are evidently split, if not quite evenly. The blokes definitely get a more indulgent eye, and probably more of the running time than the story would demand.

Even so, apparently gratuitous episodes like Rogen and Rudd’s drug-addled trip to Vegas and Mann’s freak-out in front of an apologetic club doorman are going to be replayed long after the film’s conventionally pat and over-extended wrap-up has been forgiven and forgotten.
As for Rogen, he has a couple more projects coming down the pike this year, Superbad and The Pineapple Express, both of which he’s also written. Comparisons with Will Ferrell don’t seem premature – we may even be looking at the next Bill Murray. A new star is born.