Ian Felice – In The Kingdom Of Dreams 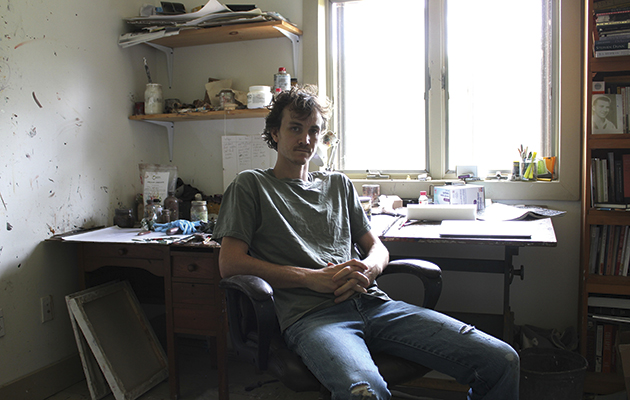 It no doubt says much about the ties that bind and the like that to back him on his first solo record, Ian Felice has basically reformed the original lineup of The Felice Brothers, the band he’s fronted now for 12 years and almost as many albums. So there are discreet appearances here by brother James on keyboards and Josh Rawson on bass, while the LP also marks the return of the errant Simone Felice, as drummer and producer, following recent successful production work with The Lumineers and Bat For Lashes. Simone has been no stranger to subsequent Felice Brothers sessions, but this is his closest collaboration with Ian since 2008, when Simone quit the band to form the short-lived The Duke & The King and record a couple of his own well-regarded solo albums.

The Felice Brothers have covered a lot of sonic territory since their Loose debut Tonight At The Arizona in 2007. You think, for instance, of the angry scourging clatter of 2009’s Yonder Stands The Clock, the often sparkling and increasingly warped, off-kilter country, fucked-up folk, exclamatory rock and bashed-up pop of Celebration, Florida (2011), Favourite Waitress (2014) and last year’s Life In The Dark. Strikingly, however, In The Kingdom Of Dreams largely returns us to the crepuscular atmospheres – the imminent dusk and spidery twilight – of their second Loose album, 2008’s The Felice Brothers, in the opinion of many a career highlight, and songs on it like “St Stephen’s End”, “Murder By Mistletoe” and “Wonderful Life”.

In The Kingdom Of Dreams was mostly written just after Ian learned he was going to become a father for the first time, and several of the songs here appear initially guileless, enchanting, with simple rhyming schemes of the kind you might hear in a song made up by a father and sung to a dozing tot. To which extent, the album may at first be heard as a celebration of a freshly acquired maturity, the responsibilities of fatherhood, a child to bring up, nurture and protect in the hearth of newfound domesticity.

Of course, it’s no more a beaming paean to any of this than Dylan’s Planet Waves, another album ostensibly about familial bliss in a Catskills setting, whose greatest song was nevertheless the poisonous “Dirge”. Restless uncertainties swarm beneath the surface of these songs, gnawing anxieties, fears for what the world is becoming and a dread of a new American autocracy indifferent to the woebegone many, the eternally downtrodden. “My father was poor as the rain and his father was poor the same… And I’m wasted and nearly in tears with the same old working-class fears/Pulling coins from the children’s ears/In grief and despair,” Felice sings on the wracked and wistful “In Memoriam”. More personally, he worries on the ruminative wee hours murmur of “Water Street”, his wife and baby asleep in their new house, that he will turn out to be like his own father, who “walked out and just kept on walking, in the light of an ’80s moon”, abandoning his young family.

A degree of surreal whimsy has frequently attached itself to Ian’s songwriting, at least partly inspired by the fabulist churn of The Basement Tapes. It’s deployed effectively here on tracks like the sardonic “21st Century” and “Road To America”, an absurdist romp, accompanied by a porch-rattling, foot-stomping chorus whose windswept cadence evokes visions of the migrant columns trudging across Wyoming tundra in Heaven’s Gate. A more general sort of doom prevails on the beseeching blues lope of “Will I Ever Reach Laredo?” and the wry ghoulishness of “Mt Despair”, whose lovelorn narrator we find at the grave of his childhood sweetheart, remembering the lassie’s demise after jumping from the titular outcrop. “She leapt into the air and I watched her disappear,” Felice sings over a pretty guitar melody. “But I didn’t,” he adds with sick detachment, “seem to care.”

Even mordant humour is absent from the album’s closing tracks. “Ten To One” and “In The Final Reckoning” broodingly contemplate a coming gloom and are full of omens, portents, plausible indicators of wretchedness to come. Only the title track’s briefly euphoric king-for-a-day chorus allows optimism into the picture. Elsewhere, there’s only darkness, an extinguished light.