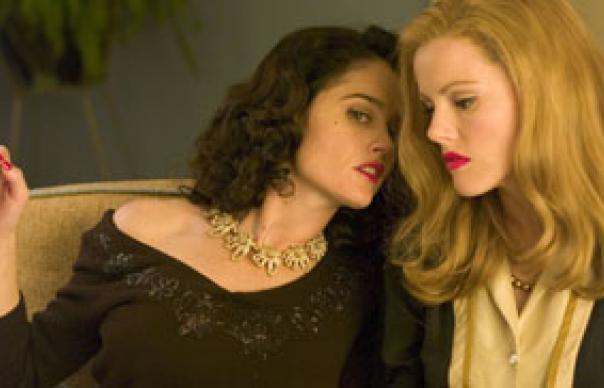 LA, 1959. After the apparent suicide of George Reeves (Affleck), private eye Louis Simo (Brody) is hired by the dead man’s mother to investigate rumours of murder. He finds that Reeves’s private life was surprisingly complex and that he was conducting a blatant affair with the wife one of Hollywood’s most ruthless fixers. But that’s not all…

For such an unassuming man, George Reeves made a lot of enemies, and when he died of a cranial gunshot wound in 1959 it seemed that quite a few people had been inclined to pull the trigger, including George himself. The coroner’s hasty suicide verdict has never sat well with America’s conspiracy theorists, and this nicely nuanced but somewhat clean-cut account of the life and death of the actor who played TV’s Superman explores the myriad possibilities. Or as one of the key players puts it, after finding two extraneous bullet holes at the crime scene, “Since when do suicides miss twice and start over?”

It’s a testament to Reeves’ status in life that he doesn’t even take centre stage in his own biopic. He’s stone cold from the get-go, and struggling private eye Louis Simo (Brody) is hired by the dead man’s mother to investigate the possibility of murder. Simo isn’t convinced at first, but the more he looks into Reeves’ bizarre domestic arrangements, the more suspects tumble out of the shadows.

For a start, Reeves has been having a not-so-secret affair with Toni (Lane), the wife of Eddie Mannix (Hoskins), tyrannical boss of MGM. But when Reeves drops her for party girl Leonore Lemmon, a gold-digger whose behaviour on the night of Reeves’ death is shifty to say the least, this leaves Simo with three plausible motives to choose from.

Though it sounds, and certainly looks at times, like a gritty noir, Hollywoodland may be too tame for some tastes; the crueller elements that seem so redolent of a James Ellroy novel — studio venality, the duplicitous landscape of glamour and amorality — are back-pedalled in favour of simple human drama. Reeves is presented as a tragic figure, but despite a noble performance by Affleck, his best role in years, we never quite figure what his tragedy is. If he’s a victim, and anyone shot dead at 45 is pretty much bound to be, then whose victim is he? By presenting every possible which way, first-time director Coulter simply muddies the matter, presenting so many options that, finally, suicide seems the least challenging option.

What the film isnt, however, often overshadows what it is. Coulter has firmly embraced the subtext of the story, contrasting the character of Simo — a floppy-locked gum-chewing gumshoe with a James Dean fixation — with that of Reeves, an ageing matinee idol with pomaded hair and hand-made suits. It’s an interesting transition that’s being made here, as though it’s not just Reeves dying but Hollywood itself, coming out of its heyday and into the now, filling out the celluloid gap between LA Confidential and American Graffiti. It’s here when the film is at its best, documenting a seachange in modern culture, not a footnote in showbiz history.