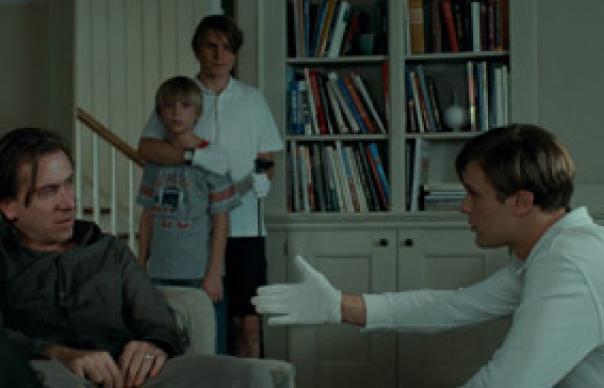 
Anyone who saw Michael Haneke‘s last film, Hidden (CachŽ), will recognize some familiar tropes here. Both films deal with the middle class under siege; both employ the cinematic language of the thriller and in both, Haneke wrong-foots the audience by rewinding or fast-forwarding footage on screen. Fans of Haneke’s wider body of work will, in turn, see how Funny Games continues the Austrian director’s ongoing fascination with violence and know, also, that this film is a shot-for-shot English language remake of Haneke’s homonymous 1997 picture.

Amazingly for a film that takes as its subject torture and murder, Haneke keeps most of the violence off-screen, preferring instead to explore its grim aftermath and, subsequently, question the way audiences traditionally consume violent movies. The impact comes from the unremitting emotional discomfort experienced by the characters, principally Anna and George, a prosperous couple played by Naomi Watts and Tim Roth, who we first meet driving with their son Georgie to a secluded lakeside retreat.

On their way, they greet their neighbours, a curiously reserved couple who appear to be playing host to a pair of young men. A short while later, “Peter” (Brady Corbett), one of the young men, arrives at Anna and George’s, asking to borrow some eggs. He’s soon joined by “Paul” (Michael Pitt). Their behaviour becomes increasingly discourteous and, after Anna tries to throw them out of the house, the first of several jarring acts of violence occurs, placing the couple’s lives in the hands of these two sadistic psychopaths.

In remaking Funny Games, Haneke is obsessively loyal to the original film; the aim here to bring the film to the wider audience he always felt it deserved. But the casting of Naomi Watts subtly shifts our attention to her character at the expense of Tim Roth’s. In the original, George was played by The Lives Of Others’ Ulrich Muhe and claimed much more of the audience’s sympathy. Muhe’s performance was underscored by a melancholy dignity and humanity; Roth’s George is weak, almost cowardly, in comparison.

Originally conceived as a comment on violence in American cinema, this new version is arguably more effective now that the distance of subtitled dialogue has been removed. What remains unchanged is the brilliant visceral discomfort of the experience. In Haneke’s hands we experience the same sense of helplessness as the family. By having Pitt talk to camera, addressing us with the same casual disdain, Haneke smashes down the fourth wall and makes it chillingly clear that we are playing by his rules and his rules alone.