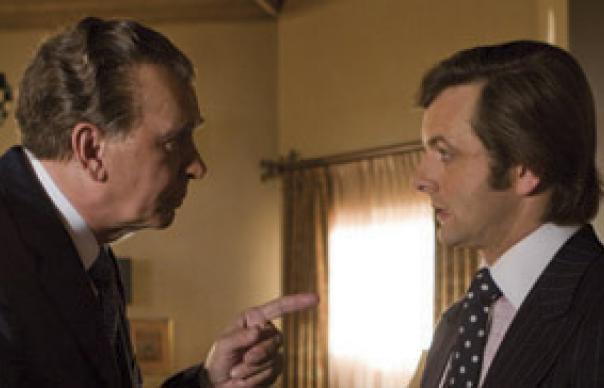 
Frost/Nixon faces, like the stage play that spawned it, a terrifying challenge: that of adding anything to the astonishing drama of the original interviews David Frost conducted with Richard Nixon. Recorded in 1977, those 29 hours of videotape amount to the only sustained interrogation about his myriad crimes to which Nixon ever submitted, and climaxed in the closest he came to an apology.

They were unprecedented, and are likely to remain unequalled. Peter Morgan’s stage play recognised this, which was why much of it consisted of verbatim performances of the interviews by the principal actors, Michael Sheen (Frost) and Frank Langella (Nixon). Ron Howard’s film keeps the two leads and much of Morgan’s screenplay, but delves deeper into the behind-the-scenes psychodrama.

Fortunately, there is a rich seam to be mined there, commencing with the utter improbability that Frost and Nixon ever met. When Nixon resigned office in August 1974, Frost’s best days, as a trans-Atlantic television superstar, also looked like memories: we see Frost watching the disgraced president’s departure from the White House from the gaudy set of a vapid chat show he was hosting in Australia. Frost’s decision that he, of all people, would be Nixon’s confessor, was staggering hubris, broadly equivalent to Jonathan Ross determining to launch his comeback with a four-part sit-down with George W Bush. But Frost’s pitch was, as the film brilliantly illuminates, an enterprise perched on the cusp of courage and desperation. Frost wanted to be respected, admired and applauded again – and so, Frost recognised, did his putative subject. Nixon, perceiving this grinning limey chat show host as a soft touch, and happy to trouser a US$600,000 fee – much of it an over-extended Frost’s own money – that he wouldn’t have got from queasy American networks, accepted.

The film’s lone flaw is a tendency to overcook the similarities between the protagonists’ personalities, culminating in the unnecessary, jarring insertion of a fictional late-night phone call from Nixon to Frost before the final interview. When tethered to reality, Frost/Nixon is splendid. The compelling Sheen radiates Frost’s oleaginous charm and overweening ambition, Langella almost invites sympathy for Nixon – no small accomplishment – and both are ably abetted by an excellent supporting cast: Toby Jones as Nixon’s agent, Swifty Lazar, Kevin Bacon as the former President’s dogged factotum, Colonel Jack Brennan, and Oliver Platt – surely a cinematic Nixon-in-waiting himself – as Bob Zelnick, one of Frost’s American hired hands.

But it’s all about the two men on camera, the showman and the politician: superbly rendered exemplars, respectively, of the lengths and the depths to which men will go to be liked.