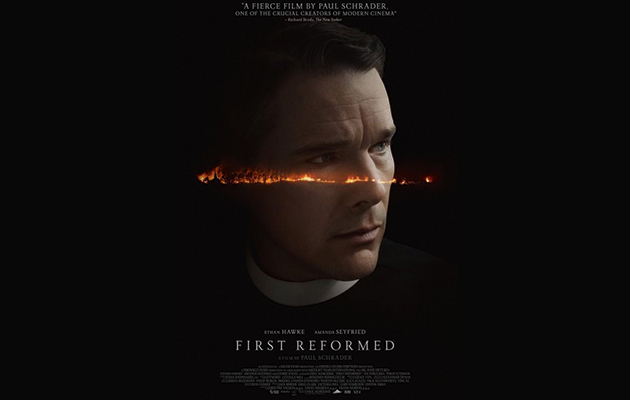 Paul Schrader has spent a career chasing down “God’s lonely man”. Travis Bickle in Taxi Driver was the first such loner going deep down a blood trail of redemption. Bickle was followed by Jake Van Dorn in Hardcore and John LeTour in Light Sleeper – now Reverend Ernst Toller, played by Ethan Hawke, in First Reformed is the latest agonised supplicant looking for renewed spiritual mission. He has washed up in Snowbridge, a fictitious town in upstate New York, where he leads the tiny congregation of a Dutch Reformed Church.

We learn he has a tragic backstory: Toller comes from a long line of military chaplins and his son was killed on duty in Iraq, after which his marriage wasn’t able to survive the strain. Toller, we are told, wasn’t “built for love”. The austere, museum-like church seems to suit Toller’s own personality and he goes about his ministrations in a quiet, terse manner. He drinks too much, though, and his urine is discoloured with blood. Then when one of his parishoners, Mary (Amanda Seyfried) asks him to look in on her husband – a radical environmentalist – things change somewhat. Toller finds fresh purpose – he begins to see the war for the planet’s future as his own war, and as the church’s. None of this bodes well.

Fans of Schrader will find much to enjoy – if that’s the right word – in First Reformed. It has echoes of Diary Of A Country Priest, by Schrader’s hero, Robert Bresson, and also Bergman’s Winter Light – another film about a small town pastor searching for deliverance. In Hawke, Schrader has found an actor willing to go the full mile – the presentation of self-violence here is extreme and extraordinary. In one moment of intentional (?) humour, the ashes of a deceased activist are distributed across a poisoned lake while the youth choir from the nearby mega-church sing Neil Young’s “Who’s Gonna Stand Up”. Radicalised, environmentally and spiritually, Toller asks, “Will God forgive us?” It’s a question for the ages.