Josh Tillman had had enough. Enough of Seattle, enough of his alter-ego J Tillman (the name under which he released a number of solo albums), enough of his relationship, enough even of Fleet Foxes, the band he’d drummed with since 2008. So he “blew everything up”, filled his van with hallucinogenic mushrooms and headed for California, where he moved into a shack in Laurel Canyon and began writing a novel. 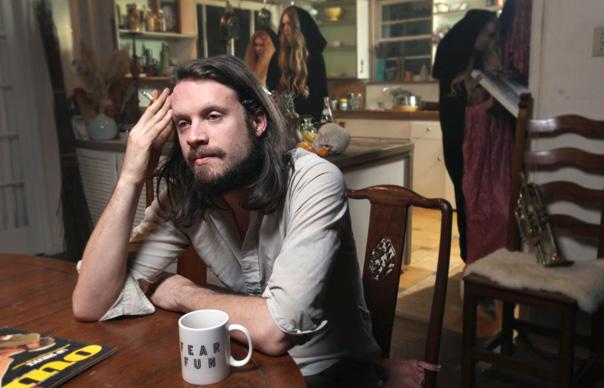 Josh Tillman had had enough. Enough of Seattle, enough of his alter-ego J Tillman (the name under which he released a number of solo albums), enough of his relationship, enough even of Fleet Foxes, the band he’d drummed with since 2008. So he “blew everything up”, filled his van with hallucinogenic mushrooms and headed for California, where he moved into a shack in Laurel Canyon and began writing a novel.

That novel unleashed a narrative voice that has now spawned an album, Fear Fun, released under the pseudonym Father John Misty and packed with sardonic, self-effacing songs that recall the finest traditions of harmony-soaked West Coast folk-and-country-influenced rock ‘n’ roll. It’s produced by Jonathan Wilson, who played on many of the songs, and is steeped in Wilson’s Laurel Canyon vibe.

“Look out Hollywood here I come,” sings Tillman on the lush, string-laden opening song “Funtimes In Babylon”, the first of many references to Hollywood that help give Fear Fun a sure sense of location. It’s also the first sign of Tillman’s humour, which he has never revealed in song before and is the key to Fear Fun’s vibe. The album was born in a ‘black dog’ of depression, but there’s nothing downbeat about the wit and warmth he exudes on the disco-country, “Nancy From Now On” and the neo-shoegazing morbid humour of “Hollywood Forever Cemetery Sings”.

Despite Tillman’s adoption of the Father John Misty pseudonym, Fear Fun is a very personal album and its centrepiece is “I’m Writing A Novel”, a road song that relates the story behind the making of the album to a Nicky Hopkins boogie reminiscent of “The Ballad Of John And Yoko” and the Mamas And The Papas “Creeque Alley”. It’s the perfect melody for a rollicking narrative that includes the mocking refrain “I’m writing a novel because it’s never been done before” and ends in the plastic purgatory of Laurel Canyon, where “I’m surrounded on all sides, by people writing novels and living on amusement rides”. (Tilllman’s own novel, incidentally, is published in its entirety on two posters that come with the album.)

Next comes the hymnal, self-explanatory “O I Long To Feel Your Arms Around Me”, which sounds like a slowed-down “Karma Chameleon”, before the celebratory, psychedelic “Misty’s Nightmares 1 & 2”. “I’m going to take my life,” he sighs, “I’m going to take my life back one day.” There’s no wallowing in self-pity here, instead a determined instinct for self-preservation. After the self-promoting carnival strum of “Only Son Of The Ladiesman” – perhaps the best showcase of Tillman’s gorgeous voice – and the whimsical, Sgt Pepper-like “This is Sally Hatchet”, complete with deranged sitar, we hit the luscious home straight.

“Well, You Can Do It Without Me” is enigmatic, slinky mid-70s AM rock that brings together Stealer’s Wheel and Waylon Jennings – an avowed hero of Tillman’s – with a whistling chorus that sounds like Roger Miller’s 1973 soundtrack for “Robin Hood” or The First Edition’s “Just Dropped In (To See What Condition My Condition Was In”). It’s partly about the record industry, as is “Now I’m Learning To Love The War”, a sweet ballad about the reality of producing art on which he asks (himself?) to ‘try not to think so much about, the truly staggering amount, of all that it takes to make a record’.

Penultimate track “Tee Pees 1-12” is an old-fashioned country hoe-down about a very Californian courtship (“We went to get some work done, so our faces finally matched, the doctor took one look at me, and took a skin draft out of my ass”), before this supremely confident album closes with the lighters-aloft George Harrison-channelling anthem “Everyman Needs A Companion”. “I never liked the name Joshua, and I got tired of J,” he confesses. So Father John Misty it is, and it sounds like he’s here to stay.
Peter Watts

Q&A
Who is Father John Misty?
He’s nobody. I like mischief and I saw this very elegant gag that after making seven or eight records under my own name that say little to nothing about myself, I could write really explicitly about myself and call it whatever I wanted.

How does it differ from your previous work?
Before I even joined Fleet Foxes I was on auto-pilot. I’d turned this thing I love into a stagnant obligatory exercise. Music had been about fear – ‘time to get into the temple of fear, time to quake and mourn and bleat and bleed’ – and I’d always been conflicted about my ability to make people laugh. I was sitting naked in a tree in Big Sur when I had this ‘a-ha’ moment and knew exactly what I had to do: ‘Sing, like you talk, idiot’. Part of this album is reclaiming the eight-year-old me before he was distorted by religion, convention and institutions.

What are the musical influences?
I like musical ideas that are devoid of pretence and songs that have ideas. The music is more or less a template, but it’s got a living, breathing human at the core. Country, blues and rock and roll are the DNA of the American musical tradition and I feel a thread of continuity with that time in American culture.
INTERVIEW: PETER WATTS