Frank Zappa, in his own words 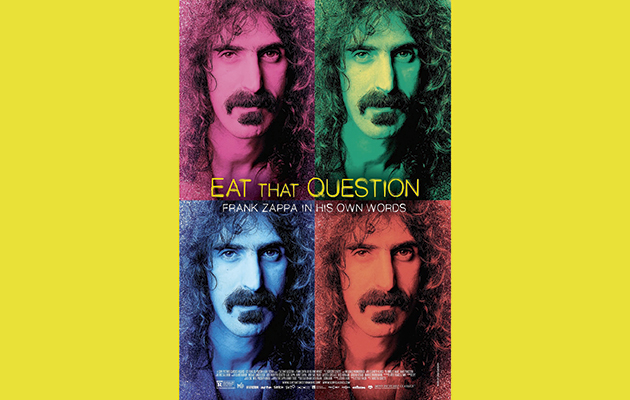 Frank Zappa – “musician, filmmaker, independent thinker” – meant to many things to many people. Foul-mouthed moustachioed freak; serious composer of classical symphonies; vehement opponent of censorship; Czechoslovakia’s Special Ambassador to the West on Trade, Culture and Tourism. It has taken an outsider – German filmmaker, Thorsten Schütte – to reconcile all these disparate strands of Zappa’s career, though there is inevitably a longer film struggling to escape this slender 90 minute running time.

Eat That Question consists of pre-existing interview footage and live performances, cut together in largely chronological order. It helps that Zappa is an articulate, witty interview – indeed, some might find it a more rewarding experience to watch him being interviewed on late night US TV shows than listen to his music. Of that, there is plenty. The best is black and white footage from October, 1968 of the original Mothers Of Invention on French television, looking like a California death cult and playing jazz-tinged but psychedelically playful sounds.

Elsewhere, Schütte loops through an incident in Berlin that same year where the Mothers are caught up in student riots, the cancellation three years later of an Albert Hall show on the grounds of obscenity. “It is a matter of survival, rather than success,” Zappa wryly notes. Yet he is visibly moved on touching down at Prague airport to find scenes of almost Beatlesesque devotion – he was a figurehead among the dissident population under Communism. The meatiest section of the film comes towards the end as Zappa takes on the PMRC, accusing their attempts to label obscene lyrics as the first step toward an Orwellian theocracy. It is here, perhaps, that Zappa does his best work.

The problems inherent in this kind of film mean that there is no contextualizing, no room for an alternate viewpoint. Super 8 footage of Zappa and Captain Beefheart larking about on the bus during the Bongo Fury tour screams out for some kind of obliging comment about their relationship. The conspicuously high turnover of Zappa’s band members and also the progressive multi-racial composition of later band line-ups are not discussed. Asked to reflect on his achievements during one of his final TV interviews, shortly before he died from prostate cancer in 1993, telling NBC’s Jamie Gangel, “Give a guy a big nose and some weird hair, and he’s capable of anything.”