David Sylvian – A Victim Of Stars

A visionary musician, revealed under the make-up... 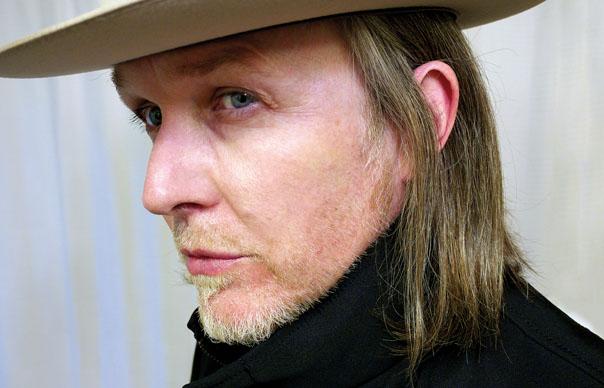 A visionary musician, revealed under the make-up…

When David Sylvian first became a presence on the pop scene on the cusp of the ’80s, it was obvious that, like many of that decade’s performers, he was hugely influenced, to the point of being besotted, by Roxy Music. Not only did he and his fellow travellers in the band Japan brandish the outlandish and flamboyant fashions of glam-rock, but Sylvian’s voice was clearly modelled on Bryan Ferry’s tremulous croon.

The combination of that erogenous baritone and his pop-star looks seemed to point inevitably to a mainstream pop position alongside the Duran Durans and Culture Clubs when, in 1982, Japan found themselves with a bona fide hit single in the shape of the winsome “Ghosts”, from the previous year’s Tin Drum album. But it speaks volumes about Sylvian’s ambitions that by then he had already effectively turned his back on “pop” music, breaking up the band to pursue more exploratory musical directions. Ironically, while his singing style was sometimes characterised as an affected copy of Ferry’s already affected lounge-lizard style, in time the aesthetic balance between the two would shift the other way, as Sylvian found far better uses for the louche croon than Ferry’s endless repetitions of a static position.

Musically, too, he became far more adventurous than both Roxy Music and the New Romantic legions who echoed the original glam-rock innovations, his work paralleling that of questing artists like Scott Walker and Talk Talk. Across a series of artful solo albums, Sylvian delved ever deeper into the worlds of jazz, avant-garde and improvised music, ultimately reaching the point where, with 2009’s Manafon, he would be constructing songs completely from improvised recording sessions involving the likes of saxophonist Evan Parker, guitarist Keith Rowe, pianist John Tilbury and laptop schemer Christian Fennesz, albeit somehow managing to impose a sense of “song-ness” on the pieces simply by dint of his vocal tracks. It’s as if he’s constantly striven to find out how little structure is necessary for there to still be a song, as such – a journey that has taken him to a position where his music has become an almost elemental presence.

The track which opens this two-and-a-half-hour anthology of Sylvian’s work cleverly embodies the course that his career has followed. It’s a version – either a remix or re-recording – of Japan’s hit “Ghosts” made for his 2000 compilation Everything & Nothing, on which the presence of apparently random blips and smudges of sound overlaid upon the song creates a link to the most recent pieces from Manafon, as if it were always intended to be heard this way.

It’s followed by a couple of singles – “Forbidden Colours“, the haunting theme from the film Merry Christmas Mr Lawrence, and the double A-side “Bamboo Houses”/”Bamboo Music” – made with Ryuichi Sakamoto, who would become a frequent collaborator over the ensuing decades. Their Oriental tone, gamelan percussion, wooden and metallic synth textures, and the latter’s innovative bouncy electro beats that would prove influential on subsequent generations of hip-hop producers, now sound more or less commonplace, an indication of how culture adapts and absorbs the new and unusual. Other important collaborators have included Robert Fripp, whose Frippertronic guitar glows at the heart of “Silver Moon” alongside BJ Cole’s pedal steel; and synthesist/producer Burnt Friedman, with whom Sylvian and his brother, drummer and longtime accomplice Steve Jansen, formed the group Nine Horses, a sort of avant-rock lounge-music ensemble.

Sylvian’s own first solo single was “Red Guitar“, a slice of jazz-funk lite blending oozing fretless bass, skittish drums and cool piano within a dipping groove. Perhaps helped by the success of “Ghosts”, it reached the UK Top 20, which enabled Sylvian to pull off the remarkable feat of getting his 1984 full-length solo debut Brilliant Trees, an album featuring musicians such as Mark Isham, Jon Hassell, Kenny Wheeler and Holger Czukay, into the Top 5. The latter’s strangulated French horn fills are still a wonder to behold.

Secrets Of The Beehive (1987), found Sylvian further entrenched in chamber-jazz terrain, with the brooding horn colouration and lowering strings of tracks like “Let The Happiness In”, “Waterfront” and “Orpheus” reflecting what was clearly a brooding, introspective personal character. But despite his introvert tendencies, Sylvian still managed to dominate 1991’s Japan reunion as Rain Tree Crow, on which Bill Nelson’s glistening sheets of guitar seemed more decisive musical contributions to tracks like “Blackwater” than those of the singer’s former bandmates. The reunion was short-lived. A couple of years later, he collaborated again with Robert Fripp on The First Day, from which comes “Jean The Birdman”, a fable of aspiration whose line “Ambition is a bloody game” seemed to sum up Sylvian’s disillusion with the music industry in general.

He would release no new studio album for the next six years, a period of inactivity eventually broken by the release in 1999 of Dead Bees On A Cake. It was a further refinement of his increasingly austere chamber-jazz aesthetic: in “Darkest Dreaming”, wisps of steel guitar and electric piano ebb and flow in quiet ripples, while Djivan Gasparyan’s duduk flute settles like the dust on a moth’s wing. But in the nine-minute-long “I Surrender”, he somehow managed to blend Kenny Wheeler’s flugelhorn, Lawrence Feldman’s flute and Mark Ribot’s subtle curlicues of wah-wah guitar into a compelling ambience of erotic languour, the perfect habitat for a vocal that seemed to open up an abyss of yearning.

By 2009’s Manafon, the music has all but eroded away to just a few hints and flecks of sound on tracks like “Snow White In Appalachia” and “Manafon” itself, whose lyric speaks of rustic isolation and deep-rooted reproach. Tinted with austere streaks of strings and gentle swells of noise, these tracks offer spooky envelopments for Sylvian’s vocals, which somehow impose the sense of recurrent structure that the music seems to deny. It’s a fascinating exercise in the kind of minimalism that doesn’t involve repetition, but rather erosion – an intriguing position to reach, especially for a musician who started out looking like a cosmetics model. As the years have passed, the made-up face has been worn away to reveal a truly interesting, uncategorisable artistic countenance.
Andy Gill