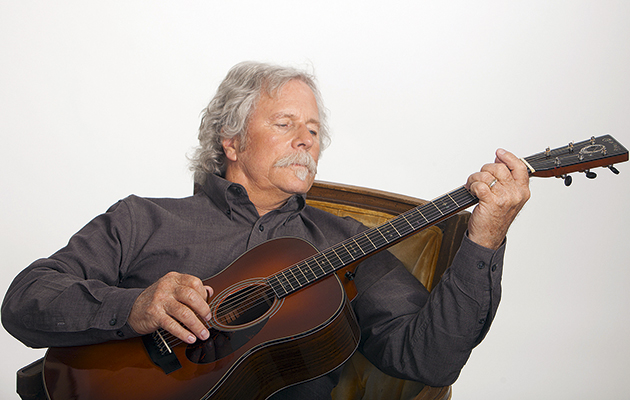 Bidin’ My Time, Chris Hillman’s first solo album in more than a decade, opens with a familiar tune: a new version of “Bells of Rhymney”, adapted by Pete Seeger from lyrics by the Welsh poet Idris Davies. Hillman has been living with the song for most of his life, having first recorded it for The Byrds’ 1965 debut, Mr Tambourine Man, an album that melded folk songs with electric guitars and invented a new genre, simply called folk rock. Naturally, Hillmans’ voice has changed over the last half-century, taking on a slightly gruffer grain and adding a soft twang to his syllables, but the guitars still chime like church bells and he still harmonises sweetly with former bandmate David Crosby and long-time collaborator Herb Pederson.

In the context of this lovely late-career comeback, which was produced by Tom Petty and features several members of the Heartbreakers, “Bells Of Rhymney” draws a straight line from the 2010s to the equally turbulent 1960s, and the lyrics have little to do with mining disasters in South Wales and everything to do with ageing folk rockers poring over memories of past glories. It becomes a song about folk rock, a song about The Byrds, a song about a generation trying to hold on to its fading dreams and deepest wishes. That bittersweet nostalgia colours every track that follows, as Hillman engages closely with his own past: not just the music he made, but the music he loves. He covers the Everly Brothers’ “Walk Right Back” with the faithfulness of a diehard fan and treats “When I Get A Little Money”, penned in 2016 by the Indiana singer-songwriter Nathan Barrow, like a lost classic.

While Hillman might have been overshadowed by his various bandmates living (Crosby, Stephen Stills) and dead (Gene Clark, Gram Parsons), he was an incredibly influential presence in the folk- and country-rock scenes of the 1960s. His background was bluegrass: he learned mandolin as a teenager and gigged around the Southern California circuit with the Scottsville Squirrel Barkers and the Golden State Boys (with future country star Vern Gosdin). Just when he was ready to give up music for an actual career, he was recruited to join The Byrds as a bass player, despite having never even touched the instrument. He remained with that group through massive hits and several lineup changes, finally jumping over to The Flying Burrito Brothers with Parsons. He played with Stills in Manassas in the 1970s, and in the ’80s enjoyed a series of country hits with Pederson and John Jorgenson in The Desert Rose Band. Since then he has toured as a solo artist and more recently as a duo with Pedersen. “I thought I really was done recording,” he says, “but along comes this record deal out of nowhere. Herb and Tom conjured up this idea to seduce me to do an album.”

The presence of Crosby and Roger McGuinn makes Bidin’ My Time as close to a Byrds reunion as we’re likely to get, and that alone makes the album compelling. Their voices still combine with a familiar magnetism, and Hillman manages to put fresh new twists on a few songs from their catalogue. “She Don’t Care About Time” was penned by Gene Clark for their other 1965 album, Turn! Turn! Turn!, but this new version sounds more like an afternoon’s reverie, as though Hillman was casually reminiscing about an old lover. And “New Old John Robertson” puts a fresh spin on a tune from 1968’s The Notorious Byrd Brothers. Hillman and McGuinn penned the song as a eulogy for an old man from Hillman’s hometown – who turned out to be a retired director of silent films, including 1920’s Dr Jekyll And Mr Hyde. Hillman now brings a new perspective to the song, identifying more closely with the ageing artist even as he recasts the tale as a spry bluegrass number.

Bidin’ My Time draws from every corner of Hillman’s long career, mixing folk rock and country rock and bluegrass into an amiable sound, somehow both modest and ambitious. Except on the sentimental “Such Is the World That We Live In”, that nostalgia sounds inviting and well-earned. The clean, crisp production recalls Rick Rubin’s work on Petty’s 1994 album Wildflowers, and Hillman underscores that connection  by covering the title track to close the album on a ruminative note. “You belong among the wildflowers,” he sings fondly, and he could be speaking to some old lover, or perhaps to Old John Robertson, or even to any of the old friends who came around to sing along.