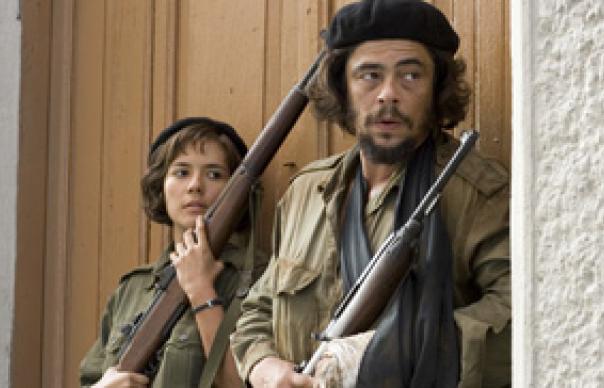 No one said revolution comes easy, and Steven Soderbergh’s account of the Communist uprising in Cuba in 1956 is not for the faint-hearted. Save for a brief episode in New York, when Guevara addresses the United Nations, the film is entirely in Spanish, and essentially on a combat footing. Soderbergh gives us a map of Cuba early on and you would be well advised to pay attention, because from then on we’re on the ground with the Companeros, in the thick of it, fighting our way foot by foot.

Che – and incidentally, Benicio Del Toro is superb – is in every scene, a naturally authoritative figure, a perfect field commander with an uncanny grasp of the lie of the land. Yet we learn precious little else about the man, or even what he’s fighting for. Soderbergh is obsessed with the “how”, not the “why”, and by the end – after long, pitched street battle for the town of Santa Clara – you’ll feel like you’ve earned your stripes.

Land And Freedom might be a useful starting point, except that Soderbergh makes Loach look like a Hollywood liberal. Part Two – scheduled for February – takes us to Bolivia and replays these same tactics to grim in-effect. There’s no real excuse for splitting them, except you might need a month’s R&R to recover.