This is the Wirral: music and football meet up North, with grim results 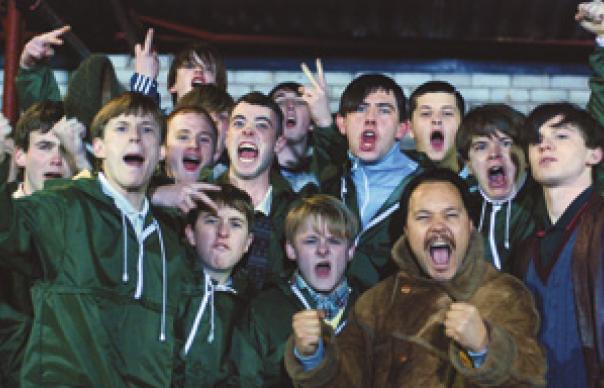 As anyone tuning in their television set recently might have noticed, the North of England in the late Seventies was, apparently, not a particularly nice place to be. At least, according to Red Riding, Channel 4’s ultimately unsatisfactory attempt to explore the psychogeographical landscape of Yorkshire during a particularly blighted period in its history. Awaydays similarly attempts to draw cultural connections in another Northern area (the Wirral) during roughly the same time period. And the conclusion is, broadly speaking, the same: it’s grim up North.

The starting point for author Kevin Samson, in this screenplay from his own novel, is a link between music and football; both of which adhere to strict rituals, fashions and codes of behaviour. On one hand, the North at the start of Thatcher’s premiership is viewed as an incredibly dark, violent place (cf: Red Ridings passim), with the closure of indigenous industries, the rise of heroin and football violence. The prevalent colour scheme in Awaydays is beige, and “Summer holidays and the Christmas piss-up are all [anyone’s] got to look forward to.” Yet, Samson acknowledges that it’s also an incredible fertile time for music – the Eric’s scene in Liverpool, Factory in Manchester, Gang Of Four in Leeds, and further north, Postcard in Glasgow.

The football hooligans, in their regulation wedge haircuts, Peter Storm cagoules and Adidas Forest Hills are at least superficially similar to the New Wavers with their floppy fringes, army greatcoats and motorcycle boots. The difference, of course, is the way they celebrate their allegiances. To the music fans, it’s watching Echo & The Bunnymen gigs at nightclubs; to The Pack, Awaydays contingent of football hooligans, it’s fighting in car parks.

You might think that the twain were never destined to meet, but in fact the core of Samson’s story concerns the relationship between art school student and emergent hooligan Carty (Nicky Bell), and Elvis (Liam Boyle), a charismatic if troubled member of The Pack who also shares Carty’s love for all things post-punk. As Carty finds himself drawn deeper into the brutal world of football hooliganism, so Elvis longs to get out; out of The Pack, out of the Wirral and, as he turns to heroin, out of his head. T

here is a vaguely-defined homoerotic subtext, between Carty and Elvis and also, perhaps, among the testosterone banter of The Pack themselves. But there’s a lot that’s vaguely-defined about Awaydays. You might wonder, for instance, why The Pack would allow a flouncing neurotic boy outsider like Elvis on their rampages. Or exactly what motives a seemingly nice young kid like Carty to want to express himself with a Stanley knife. There’s little context, too, for The Pack themselves, particularly their terrifying father figure/leader, John Godden (Stephen Gaghan, channelling the spirit of Combo from This Is England in a sheepskin jacket). But director Holden at least manages some grand flourishes.

The sight of The Pack turning a corner in slow-motion as they head towards their latest fight soundtracked to Magazine’s “The Light Pours Out Of Me” may be derivative of the Scorsese/Meadows model, but it stills feels exhilarating. For a more articulate expression of the casual/music crossover, you’re better off tracking down Flowered Up’s magnificent Weekender film.