The Besnard Lakes – Are The Last Of The Great Thunderstorm Warnings

Psych mainstays reach for the stars 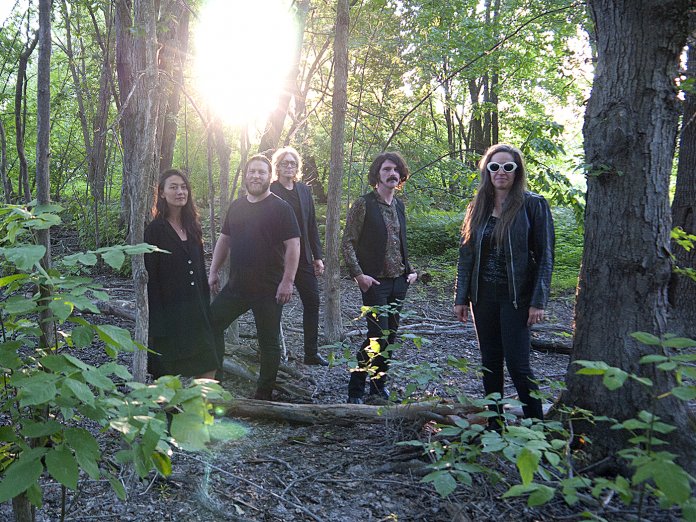 A sprawling, symphonic rock ensemble from a country that has come to be known for them, The Besnard Lakes have been a constant at the coalface of Canadian independent music for some 15 years now. In this time, the group – which revolves around the creative and romantic partnership of husband and wife Jace Lasek and Olga Goreas – have created a respectable body of work, five albums of dense, textured progressive music, two of which have been nominated for Canada’s Mercury equivalent, the Polaris Prize.

Fifteen years, of course, is a long time to have been in a rock group, a period long enough to weed out all but the most committed. By that point, the early hype has reduced to all but embers, elder statesman status is at least a decade off – truly, these are the marathon years. Had The Besnard Lakes not have gone the distance, it would have been understandable. Some five years have passed since their last album, 2016’s A Coliseum Complex Museum – a perfectly serviceable piece of work that was dismissed in some quarters for being, well, yet another Besnard Lakes album. Following its release, they separated from their long-time label Jagjaguwar, with them since 2007’s The Besnard Lakes Are The Dark Horse. Lasek, meanwhile, has a productive side-hustle, working as a producer for groups like Wolf Parade and Stars at the studio he co-owns, Breakglass, in Montreal.

At this point, Jace and Olga might have called it a day. But instead, The Besnard Lakes have somehow pulled off a remarkable resurrection. Their sixth album – the audaciously titled The Besnard Lakes Are The Last Of The Great Thunderstorm Warnings – is an astonishing return, up there with their best records to date. Clocking in at 72 minutes, it’s an album replete with echoes and allusions to the band’s history, grappling with themes of death and renewal. “Things have been changing/Breathing new life into our heads”, sings Goreas to a fanfare of horns on “Our Heads, Our Hearts On Fire Again”. Here is a band back in love with the idea of being a band.

How did this happen? In part, The Besnard Lakes’ rebirth is down to a return to first principles. There is the album title – the return to a naming convention that began with 2007’s The Besnard Lakes Are The Dark Horse and 2010’s The Besnard Lakes Are The Roaring Night. There are songs here from throughout the band’s lifespan, tracks like “New Revolution” that were set aside for whatever reason but, heard with fresh ears, suddenly felt right. And there are, of course, more “spy songs” – curious narratives rooted in Lasek’s love for the shadowy world of international espionage. The opening “Blackstrap” tells the story of an agent who climbs a mountain in search of signal, hoping to contact his lost love. The band lock into a sort of seasick melody, as a dial tone rings, rings, rings, rings, and the track ends on a cliffhanger of sorts. “All your gods will grow up tonight”, sings Lasek, enigmatically, as the ashes fall back to earth.

Like his musical hero Brian Wilson, Lasek is enamoured with the idea that the studio itself is the most important instrument. The Besnard Lakes have long had a certain widescreen aspect to their sound, but on …Last Of The Great Thunderstorm Warnings, we hear a new sense of spaciousness and ebb and flow. Lasek mentions Pink Floyd’s The Dark Side Of The Moon as a possible touchstone, and there is that sense of scale here. The album is divided into four sides – “Near Death”, “Death”, “After Death” and “Life” – and each one brings in shifts in mood and tone, sometimes subtle, at times astonishing. Take that moment six-and-a-half minutes into “Christmas Can Wait”, where after a period of synth-powered stargazing, the drums start up, Lasek’s falsetto swoops out of the darkness and guitar notes blaze through
the sky like meteorites breaching the outer atmosphere.

“Christmas Can Wait” is a song about death – explicitly, the death of Lasek’s father, who while dosed up with morphine in his final days, experienced dramatic hallucinations that he communicated to his son. Thoughts of death permeate …Last Of The Great Thunderstorm Warnings – not in a sophomoric or gothic way, but as a sort of weighing of something gigantic and profound. One is reminded of the fact that a dose of DMT is supposed to mimic a near-death experience; here, The Besnard Lakes employ psychedelia as a means of approaching and coming to terms with the unfathomable.

Two other tracks explicitly pay tribute to lost heroes of The Besnard Lakes’ musical firmament. “Raindrops” is a psychedelic flight of fancy with a lyric (“Garden of Eden, spirited/Did it need to be protected?”) that makes oblique reference to Talk Talk’s Mark Hollis, who passed away in 2019. “The Father Of Time Wakes Up”, meanwhile, is more explicitly a tribute to Prince. The lyrics are littered with Easter eggs – “Jamie Starr would steal everything you wore”, sings Lasek, a reference to Prince’s production pseudonym – while the song ends with a distinctly Purple guitar solo, played with requisite flash by the band’s friend Mark Cuthbertson of the
group Fantasticboom.

If …Last Of The Great Thunderstorm Warnings starts in a dark and somewhat muted place, it grows into one of the most upbeat and optimistic albums of the band’s career. “Feuds With Guns” is another spy song, some sort of ambush “on the dark side of town” – but musically, it’s a sweet thing, all soaring falsettos and warm mellotron. “The Dark Side Of Paradise” is a dreamy, shoegaze-tinted love song from Jace to Olga that recalls something of the twilit indulgence of Mercury Rev’s All Is Dream. And “New Revolution”, a revived offcut from the Until In Excess, Imperceptible UFO sessions, glows with positivity. “There’re so many ways of creation/So let’s write the world in our lifetime”, they sing, before a squalling synth solo draws the song to a close.

The final side – lest we remember, “Life” – is entirely dedicated to a title track that clocks in close to 18 minutes in length. It starts in a place of desperation. “Oh mother could you make the moon talk to me?” sings Jace. “Cos everybody here they hate my dream/Could you tear apart the world and make them see?” Come the end, though, the lyric is speaking the language of resolve and commitment: “Leave a light on for me love/No one else will take me now…” Then, after seven minutes of fireworks, the track dissipates into a gentle, undulating space drone that persists for 10 minutes, a deep cleanse for the brain.

On …Last Of The Great Thunderstorm Warnings, we hear The Besnard Lakes make a very contemporary take on psychedelic music; wise to rock history but not in thrall to it, more interested in asking the big questions than senselessly adding to the canon. They are far from the first psychedelic band to step up and attempt to pierce the veil of reality, in the hope of glimpsing what lies beyond. But by asking real and profound questions – and by making music with enough grace and power to carry at least some of that profundity – it cannot be denied that they have got a lot closer than most.