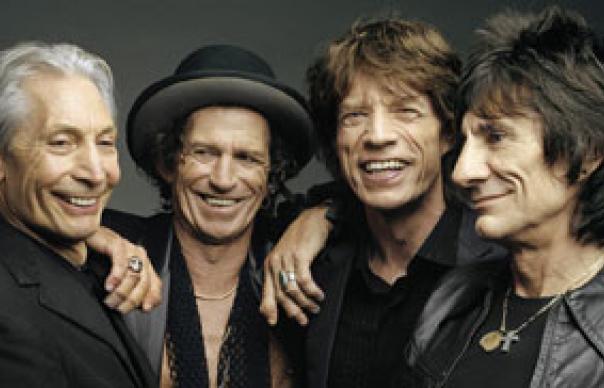 If you grew up in the 1970s, The Rolling Stones were not Lucifer or Jumpin’ Jack Flash. They were five guys in Gene Kelly sailor suits cavorting inside a striped tent filled with foam. They looked as hammy as Elton, yet had godless dark shadows around their eyes. Talk about intriguing! However, even as that 1974 promo film for “It’s Only Rock’N’Roll (But I Like It)” flickered on children’s TV, our elders were declaring the Stones a spent force with a dead-duck dictator, his power reduced to a pair of rubber lips and a black, rotting soul.

Today, the viewpoint prevails that the Stones took their eye off the ball somewhere around 1973 and never regained momentum. We’ve heard the theories. Bianca ruined Mick. Heroin ruined Keith. Money, arrogance and complacency ruined whatever was left. But while their growing fondness for sentimental ballads like “Angie” (Goats Head Soup), “Till The Next Goodbye” (It’s Only Rock’N’Roll) and “Memory Motel” (Black And Blue) must have dismayed fans who craved a return to top-dollar rock’n’roll, it’s clear in hindsight that the Stones had entered the most musically accomplished – and most unfairly criticised – phase in their history.

The tempos slowed, lead guitarist Mick Taylor rose silkily to the challenge, and discreet influences of Stevie Wonder, Van Morrison and Traffic blended subtly into an exotic, herbal, soulful, timeless, rather melancholy strain of mid-Atlantic rock. Some of it was beautiful: “Angie, Angie, you can’t say we never tried”. Some of it was less so. (West Indian accent: “I’m workin’ so hard to keep you in de luxury.”) Keyboards were prominent, notably electric pianos and Motown-favoured clavinets, and ‘outside’ musicians were used extensively. On Black And Blue (1976), the recording sessions and the auditions for Taylor’s replacement became one and the same thing.

Even after Ronnie Wood’s arrival, and notwithstanding the back-to-basics approach that they took on Some Girls (and its less appealing follow-up, Emotional Rescue), the Stones continued to be musicians worth paying attention to. They simply do not play their instruments like any other band, and can sound both sloppy and sophisticated; garage-y and precision-honed; behind the beat and dead-on-the-nail. Some songs appear to have very little going for them (“Dance Little Sister”, “Hey Negrita”, “Pretty Beat Up”) except for a riff, a bassline, a rattlesnake attitude and some little twist that nags at your brain. These songs sometimes prove the most rewarding in the long term.

Above all, and let’s be unequivocal, the sequence of albums from Sticky Fingers (1971) to Undercover (1983) constitutes one of the most jaw-dropping, unrepentant narratives from rock’s golden age. It has ineffable swagger, groove and plot. It tells a story of slave ships, houseboys, morphine addicts, starfuckers, FBI phone-tappers, vengeful murderers, prospective Toronto jailbirds and South American revolutionaries. It begins with a song written in the middle of an Australian desert and recorded five days prior to Altamont (“Brown Sugar”), and ends by dropping us into a madhouse full of TV evangelists and prisoners of war (“It Must Be Hell”).

En route, we hear three of the greatest guitar solos of the 1970s (Mick Taylor’s “Sway” and “Time Waits For No One”, and Wayne Perkins’ “Hand Of Fate”), as well as the most viciously syncopated, instinctively wrist-driven rhythm guitar player that popular music has ever known.

Last remastered in 1994, these records scarcely require a legitimate excuse to play them again and again. Discovering that I have woken up and am still alive is usually enough of a reason to put on a Stones album, and no morning is so baleful, so clouded with dread, that it cannot be appeased by strong Italian coffee and Sticky Fingers, Some Girls, Black And Blue or Tattoo You.

These 2009 remasters sound fine, possibly up a notch in the bass frequencies, though there isn’t too overt a sonic upgrade from ’94 – a touch of wrinkle-remover here and there, perhaps, rather than a comprehensive Swiss clinic blood transfusion. Exile On Main Street, the 1972 classic, is excluded from the current batch of reissues and will follow early next year.

If one listens to all eight of these albums in a row (as I’ve done a few times), one can trace the journey of a ‘connoisseur’ Stones, an intensely musical Stones, from Sticky Fingers (the seven-minute Latin-rock excursion “Can’t You Hear Me Knocking”) to Goats Head Soup and It’s Only Rock’N’Roll (“Coming Down Again”, “Winter”, “Fingerprint File”) to Black And Blue (“Fool To Cry”, “Memory Motel”). The last-named album, almost universally dismissed as substandard in 1976, now makes perfect sense in the Stones’ career arc as a truly satisfying road-trip from beach to motel to sugar shack, via funk, rock, soul, jazz and reggae. It’s hard to see why there was such a furore over it.

Once Wood staggers on board (his first album as a full member was Some Girls), proceedings become a lot more abrasive and frenetic, which came as a relief to critics and listeners in 1978, but which now, funnily enough, seems like a step backwards into unnecessary simplicity. It’s true that Some Girls is a landmark Stones album, very much conscious of punk, with wonderful songs everywhere you look (“Miss You”, “Beast Of Burden”, “Shattered”); but the thrashy, pell-mell riffing of “Lies” and “Respectable” – not so impressive – was to become a serious irritation the more Richards, Wood and Jagger repeated it on Emotional Rescue, Undercover and the outtake collection, Tattoo You.

Tattoo You (1981), a multi-genre grower once the instant thrill of “Start Me Up” has subsided, has often been described as the last great Rolling Stones album. Any mid-’70s Stones fan can tell you why. Five songs (“Tops”, “Waiting On A Friend”, “Black Limousine”, “Slave”, “Worried About You”) date from 1972–75 sessions, and were originally recorded for Goats Head Soup, It’s Only Rock’N Roll and Black And Blue. It proves a point, you know. In the tale of the Stones, even the so-called worst of times are among the best.