The band take on Communication Breakdown at Awards Ceremony 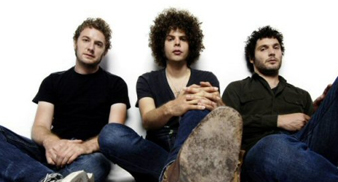 Hard-rocking Aussies Wolfmother have renounced Satan ahead of their Led Zeppelin tribute at the UK Hall of Fame ceremony tonight (November 14).

The band will play “Communication Breakdown” in honour of Led Zep’s induction into the hall of fame, but frontman Andrew Stockdale says he doesn’t share the ’70s legends’ fascination with the occult.

“I just wanna know are they for real with those satanic beliefs ‘cos we don’t wanna go there,” he told Uncut. “That’s dumb shit.”

He added, “I like rock & roll but I don’t wanna fuckin’ harness dark spirits and sacrifice lambs. I just wanna be a normal dude with a simple life, I don’t wanna go down that path. It just scares me, man.”

However, the singer also expressed amazement at the band’s power to reach a new generation of fans.

Andrew said that a newer generation of fans are loving the old classics, “We did ‘Communication Breakdown’ last night in our encore; it’s amazing. You kind of wonder with those old songs whether young people don’t know about them, but they know every word.

“It’s like with Pearl Jam, with their encore they did [The Who’s] ‘Baba O’Riley and you think, ‘Are they gonna know that?’, then all 30,000 people start singing the words. It’s incredible.”

The other stars to be honoured at this year’s Hall of Fame Awards are Brian Wilson, Rod Stewart, Dusty Springfield and Beatles producer Sir George Martin.