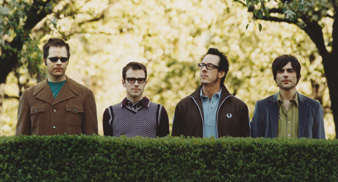 Weezer‘s Rivers Cuomo has said that the band’s new studio is near to completion.

Posting on the band’s website weezer.com, Cuomo reports that they “have one song left to mix and then it’s on to mastering. We should be all done very soon. Then we chill for a minute.”

He adds that “the album is meaty, crunchy and melodic like a good Weezer album should be.”

Cumo also teases fans with what the first single from the album will be called. He says “It’s one word, starts with a T, ends with an R and contains twelve letters. You should be able to figure it out because you’re smart li’l Weezer fans.”

The new studio album is due for release this June.