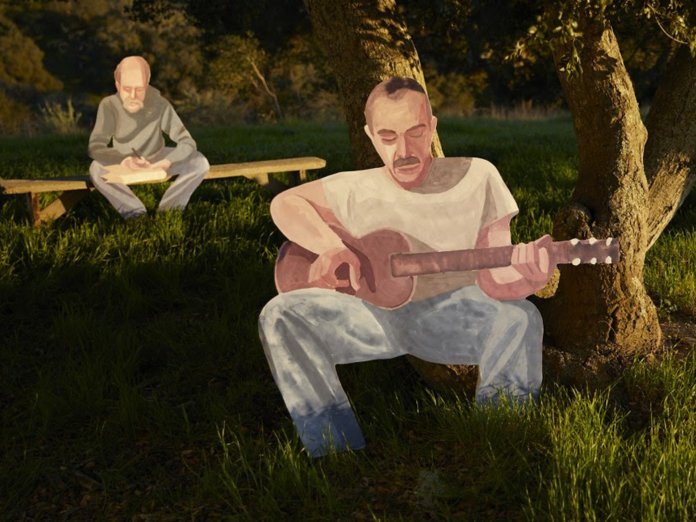 Matt Sweeney and Bonnie ‘Prince’ Billy’s highly-anticipated Superwolves album is due out on Domino on April 30 (digitally) and June 18 (physically).

Following the release of “Make Worry For Me” and “Hall Of Death”, you can watch a video for new single “My Blue Suit” below:

The video was created by Geoff McFetridge, who says: “I started this video by painting. The work I created, in response to the song, was large scale figures I could use in scenes filmed on camera. All the images in the film are done in camera, there are no digital effects. The graphic sequences were done with paintings wrapped around a garbage can placed on a Technics 1200 turntable. The tools used to create the effects were knives, glue, paint and tape. The pieces created for the film are nearly life size portraits done with acrylic on paper. These works, the film and the animated elements will be shown in the project space of Cooper Cole Gallery in Toronto, opening May 1.”

You can pre-order Superwolves here, including new bundles that come with ‘Make Coffee for Me’ – a 200g whole bean coffee from Brazil selected by Matt Sweeney, roasted by Old Spike Roastery in Peckham – or ‘Make Worry For Tea’ – a 75g rose/basil infusion specially created by Bonnie ‘Prince’ Billy and made by The Old Tea House, Covent Garden.

Rough Trade will host a live Q&A with Matt Sweeney and Bonnie ‘Prince’ Billy on June 21. For more info and tickets, go here. The duo will also play a short series of in-person live dates in California this June: