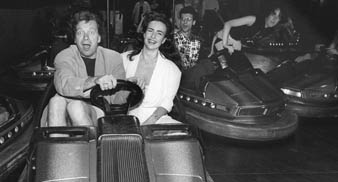 For almost 40 years, Wilson balanced a career as a TV news reporter and radio host with a sideline as a record company boss, band manager, club owner and all-round pop cheerleader. As such, he played a unique ringmaster role in punk, acid house and the Madchester boom.

Wilson was a great catalyst, a champion bullshitter and a pretty terrible businessman – all thoroughly commendable qualities. He was also a dream interview, and very funny on the rare occasions I spoke to him. “Don’t print this,” he once told me, “but all musicians are cunts.”

It has long been a Mancunian tradition to deride the Salford-born Wilson for his grandiose manner and arty affectations. As portrayed by Steve Coogan in Michael Winterbottom’s 24 Hour Party People and by Craig Parkinson in Anton Corbijn’s forthcoming Ian Curtis biopic Control, the Factory boss was a pretentious dandy fond of flaunting his Cambridge education in between colourful bouts of sex, drugs and rock’n’roll. To his credit, Wilson endorsed and co-produced both movies.

But it was precisely these over-reaching ambitions that made Wilson such an inspirational figure. He gave bands like Joy Division and Happy Mondays the creative freedom to blossom into immortal rock legends. “He saw himself as a patron of the arts rather than a record company boss,” New Order’s Bernard Sumner told me recently, “which was wonderful.”

Wilson also aspired to bring cutting-edge design to the masses in the form of Factory’s elegant record sleeves and graphics. He brought a dash of intellectual and cultural gravitas to pop, even during the dumbed-down posturing of punk. He always aimed high, and encouraged others to do the same.

Through TV shows like So It Goes and The Other Side Of Midnight, Wilson gave valuable early exposure to bands like the Sex Pistols, the Clash and the Stone Roses. As co-owner of one of the most fabled nightclubs in history, the Hacienda, he also played a key role in bringing house music and club culture to the British mainstream. Accidentally, perhaps, but his scattershot enthusiasm was always more important than his erratic nose for talent.

Even when Wilson’s ventures failed, they usually failed for good reason. Years ahead of its time, The Hacienda was reportedly a million pounds in debt within a year of opening in 1982. Later, it fell victim to its own high-profile success as a battleground in Manchester’s drug wars.

Meanwhile, Factory collapsed because of extravagant overspending, a comically haphazard A&R policy and a Happy Mondays album that seemed to involve Shaun Ryder snorting or smoking all the drugs in the Caribbean. The ailing label might even have weathered these disasters if Wilson hadn’t signed a pact in his own blood effectively promising his artists total freedom from contractual obligation.

Of course, this heroic disregard for profit margins probably destroyed Factory in the end, but what a fantastic way to go. Anarchy in the UK – or Manchester, at least. Sheer, bloody-minded genius.

Even if Factory is no more, Wilson’s imprint on modern Manchester is impossible to ignore. From the revamped Hacienda, now a block of luxury flats, to the futuristic Urbis museum, the late mogul’s vision of his home city as a world-class cultural hub was largely realised in his lifetime.

It was not his effort alone, of course. But Wilson remained a tireless cheerleader and figurehead for local causes right up until his death. In recent years he balanced high-profile Manchester radio work with relaunching Factory in various guises, co-founding the annual music business seminar In The City, and campaigning vociferously for a regional assembly in the North West.

Tony Wilson was certainly a smart self-publicist, sometimes a bolshie gobshite, often wildly and brilliantly wrong. But ultimately, he spent his career promoting the city of his birth and the talent of its citizens. We have lost a noble man and a true original.

You can read the full Factory Catalogue here.