Fans turned away from midnight gig in the woods 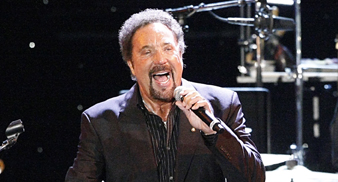 The 2010 Latitude Festival got off to a chaotic start last night (July 15) as Tom Jones‘ intimate gig in the woods drew a crowd of thousands, causing the area to be closed and large numbers of fans to be turned away.

Jones was showcasing his new album of blues and gospel songs, ‘Praise And Blame’, though many fans were clearly expecting a hits set, singing ‘It’s Not Unusual’ and ‘What’s New Pussycat?’ while waiting for the singer to arrive.

Such was the demand to see the singer, who played on the eve of the main musical entertainment kicking off, hundreds were unable to get near the stage, with many stuck on the bridge that provided access to the woodland arenas.

Taking the stage half an hour late at 12.30am (BST), Jones performed his new album in sequence, dressed all in black and backed by a four-piece band, including producer Ethan Johns on guitar.

Jones had been nervous before the show, telling Uncut’s sister publication NME: “This is a new experience for me. I’m known as a showman, so when you play unfamiliar material, you’re never sure how the crowd will react.”

In the event the crowd responded well to the new songs, though there were repeated, bellowed requests for more familiar material, in particular Jones‘ 1999 hit ‘Sex Bomb’.

At the end of the gig, when it became clear there would be no encore of hits, some low-level booing could be heard, though this turned to cheers when it was announced the singer would return to play the festival’s Obelisk Stage on Sunday (July 18).

However, the earlier crowd problems cast a shadow over the performance. Fans who’d been turned away were angry with organisers. Fran Rose, 18, from Ipswich told NME: “This was a nightmare. We got caught in a human crush on the bridge and there was no crowd control. Young kids in the crowd were really scared, someone could have got hurt.”

Tom Martin, 21, from London, added: “What’s the point in putting an artist on a stage where no-one can see him? They must have known loads of people would want to see Tom Jones. It’s not rocket science.”

Latitude continues today (July 16) with performances from Florence And The Machine, Empire Of The Sun, The National, Laura Marling and Richard Hawley. NME.COM will have regular reports from the site all weekend.