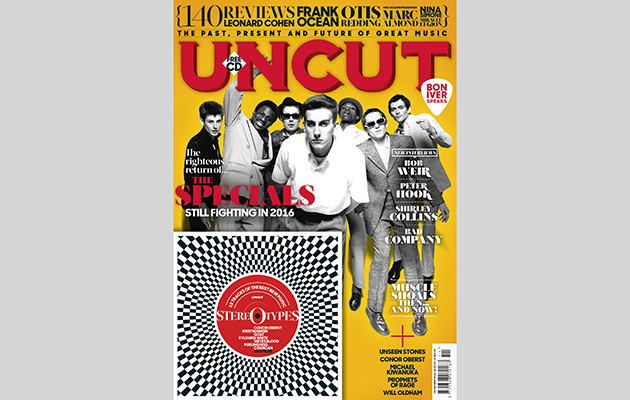 The Specials, Bob Weir, Peter Hook and Leonard Cohen all feature in the new issue of Uncut, dated November 2016 and on sale now or available to buy digitally by clicking here.

The 2 Tone survivors are on the cover, and inside the magazine the group take us through their 40-year history, uncovering a tale of endurance in the face of racism, bereavement and rifts.

Discussing their decision to reconvene for a tour that will reassert their importance as one of the great British bands, Horace Panter says: “Injustice is timeless. The same message from 1979 is relevant in 2016… There’s something about us: the whole is greater than the sum of its parts.”

As he returns with his first studio album for 30 years, Bob Weir meets Uncut to discuss the long, strange saga of the Grateful Dead, his new record and the band’s “final farewell”. “From my point of view,” he explains, “it would be sinful to walk away from that body of work.”

Peter Hook answers your questions on topics ranging from Ian Curtis, Peter Saville, leather pants and throwing six dozen eggs at the Buzzcocks. “New Order did so much together, it breaks my heart every day,” he tells us.

Elsewhere, Leonard Cohen‘s new album, You Want It Darker, is our album of the month, and Jason Anderson writes an extended, in-depth review of the record.

Shirley Collins, the grande dame of English folk, tells the fascinating story of her 81-year odyssey, ghosts and all, as she prepares to release Lodestar, her first album for 38 years. “I’m finding my nerve again,” she tells Uncut. “I lost it for too many years.”

We also look at the past, present and future of Muscle Shoals, the cradle of Southern soul and rock, and shine the spotlight on four new Alabama bands that you need to hear. “People are protective of the Shoals and want to keep it goin’,” says John Paul White.

Bad Company take us through the making of their hit “Feel Like Makin’ Love”, which includes medieval banquets, haunted studios and Californian hitch-hiking, while Conor Oberst discusses his greatest albums, from Bright Eyes, Desaparecidos, Monsters Of Folk and solo – “We were really ambitious,” he explains, “but the charm is that we didn’t know what the fuck we were doing.”

Bill Wyman, Prophets Of Rage, Will Oldham and DD Dumbo appear in Uncut‘s Instant Karma! section, while new albums from Frank Ocean, Hiss Golden Messenger, David Crosby and more are reviewed, alongside archival releases from Marc Almond, Otis Redding, Lou Reed and Steve Hillage. Films including Werner Herzog‘s Lo And Behold, Ken Loach‘s I, Daniel Blake and Oasis‘ Supersonic are reviewed, while we catch live sets from Miracle Legion and some of the best acts at End Of The Road festival.