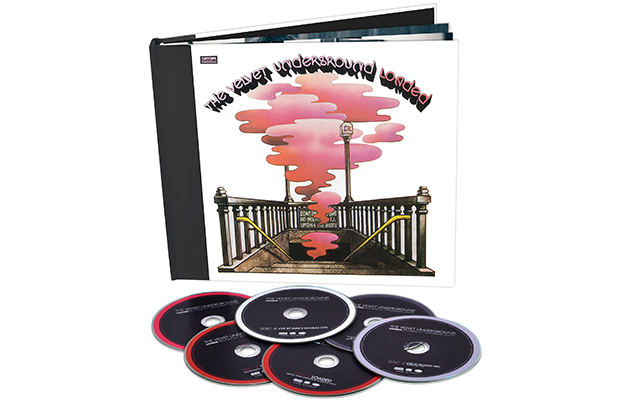 The Velvet Underground album Loaded is to be re-released on October 30 by Rhino.

The set contains the original 1970 album remastered in both stereo and mono; demos, early versions and alternate mixes from that era; a newly remastered/re-edited version of Live At Max’s Kansas City; an unreleased May 1970 concert recorded in Philadelphia.

Remastered stereo and mono versions of the album fill out the first two discs, along with various outtakes, and the mono mix for the unissued single: “Rock & Roll” b/w “Lonesome Cowboy Bill.” The third disc explores the creative process behind many of the songs on the album with more than 20 demos, early versions and alternate mixes.

Also included is a remastered version of Live At Max’s Kansas City, which was recorded at the storied New York nightclub on August 23, 1970, the day Lou Reed left the band. Along with the performances from the original 1972 album, the disc includes additional performances selected from the expanded version of the album that Rhino introduced in 2004.

An unreleased club performance feature on the fifth disc. It was recorded on May 9, 1970 at the Second Fret in Philadelphia. The band was down to a trio that night: Lou Reed, Sterling Morrison and Doug Yule, who alternated between bass and drums to fill in for Moe Tucker, who was pregnant at the time. Loaded, which came out six months after the show, is well represented with seven songs, including: “Cool It Down,” “Oh! Sweet Nuthin’” and “Sweet Jane”.

For the Surround Sound and Stereo Downmix, the original track listing has been re-sequenced slightly to include the segue that was originally planned for “I Found A Reason/Head Held High.”

The tracklisting for Loaded: Re-Loaded 45th Anniversary Edition is:

Session Outtakes:
“I’m Sticking With You” – New Remix
“Ocean”
“I Love You”
“Ride Into The Sun”