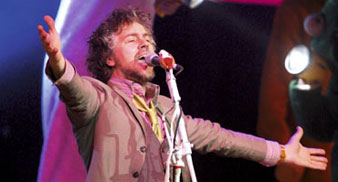 The Flaming Lips plan to call their forthcoming studio album ‘Embryonic’ and it should be ready for release this Autumn.

The double album has yet to have a final tracklisting as yet, frontman Wayne Coyne has told BBC 6 Music.

Coyne added that making the album was proving onerous in a way, saying : “I think it must be like being a cook in the kitchen, you’re preparing this great thing but by the time it’s ready you’re sick of it because you’ve been smelling it, you’ve got it in your hair and in your fingers and all that.”

The Flaming Lips’ last album released was ‘At War With The Mystics’ in 2006.

For more music and film news from Uncut, click here