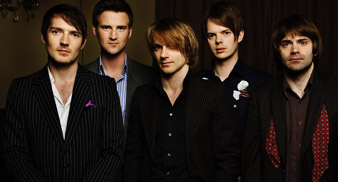 Indie popsters The Feeling have announced that they will play three shows in the forest, as part of the Forestry Commisions annual summer tour, this June.

The Brit Award nominated band won’t have to worry about people not knowing their songs this time around. Last years’ four Top 20 singles “Sewn,” “Fill My Little World,” “Never Be Lonely” and “Love It When You Call” have earned them the title of most played group on UK radio.

The four hit singles clocked up a massive total of 97,436 plays in the UK. That equates to 297 times a day!

Forest Tours’ Mike Taylor said he was pleased that The Feeling will be joining previously announced artsists, The Charlatans and Jools Holland, in supporting the Forestry Commission’s valuable social and environmental programmes.

He said: “We are delighted The Feeling has confirmed these shows. They are rising stars of the British music scene and will undoubtedly be a huge hit in the forests.”

Gillespie Sells and co will be bringing their pop hits to the following green locations: