The bassist relives his 1978 Rock Against Racism set with Strummer and co. 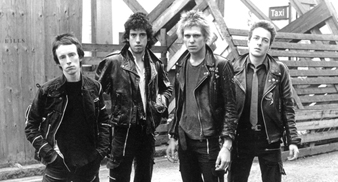 The Clash‘s Paul Simonon has spoken about his experiences at the Love Music Hate Racism Carnival, held in east London‘s Victoria Park.

The bassist, who headlined the set with The Good The Bad And The Queen, told Uncut.co.uk he believed there were more people at the festival yesterday (April 27) than there were at the 1978 Rock Against Racism gig, which The Clash headlined.

Asked what he remembered about the original festival, Simonon replied: “I remember [Sham 69‘s] Jimmy Pursey jumping onstage! I think we were too busy concentrating on our chords and [thinking] ‘what’s the next song’ and then suddenly I realised there were a whole heap of people out there, and it’s good to see the same here again – I dunno, though, maybe there were a few more today.”

Simonon also highlighted the importance of the cause, explaining: “This country has been built on immigration, people since the Vikings, the Belgai, the Huguenots, people fleeing Franco’s Spain, it’s what makes this place what it is. I don’t mean to be silly about it, but it’s nice to have egg and chips, but it’s pretty nice to have chicken, rice and peas too, you know?”

Damon Albarn told Uncut.co.uk of his memories of the original 1978 festival, saying: “I was aware of its existence, but it was a bit before my time. I don’t want to age myself even more!

“At primary school [in Leytonstone, east London] we didn’t really experience any racism. I went to a very mixed primary school, I’d say it was a third white, a third Pakistani and Bangladeshi and a third Jamaican. I only became really aware of racism when I moved to Colchester and went to an all-white school, and all that came with that at that time, Thatcher’s Britain, etc., etc.”

Filmmaker and musician Don Letts, perhaps most famous for working with Mick Jones in Big Audio Dynamite, also stressed the importance of vigilance against racism.

“[Racism is] a lot more insidious, it might not be as overt,” he explained. “When I used to walk around you’d see all this graffiti saying ‘KBW’, Keep Britain White, and the National Front used to be really recognisable but now all these dudes are in suits and ties.

“Someone once said ‘the price of freedom is eternal vigilance’ and it’s never been truer than now, look at the world. [Racists] have got hip to it, they’ve got media-savvy, and we’ve got to get double hip, do you know what I mean? It’s when you think everything’s ok that it’s not. We’ve got to keep on our toes.”