Status Quo launch their own ale and cider 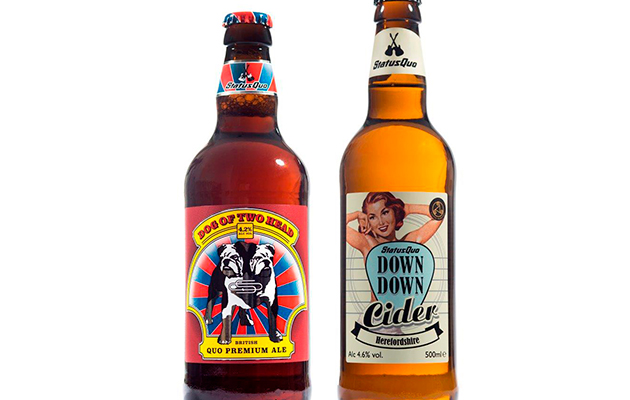 Status Quo have launched their own alcoholic beverages.

The ‘Dog Of Two Head’ ale and the ‘Down Down’ cider will be available bottled in the UK through the Spar chain from May 18.

‘Dog Of Two Head’ will be available to buy on draught at selected outlets from June.

‘Down Down’ has been selected for Wetherspoon’s National Cider Festival which runs from Friday July 8.

‘Dog Of Two Head’ ale was created in conjunction with Hobsons Brewery in Shropshire, ‘Down Down’ cider is crafted by the Celtic Marches company in Herefordshire.

Rick Parfitt added, “It’s no secret that over the years the band has enjoyed a drink or three. Finally, we’re actually seeing a return on those wasted hours by creating something useful. We love it!”

Both ‘Dog Of Two Head’ and ‘Down Down’ will be available online. The beer can be purchased from www.hobsons-brewery.co.uk/statusquobeer. The cider can be ordered online from: www.celticmarches.com/detail/status-quo-down-down-4-6-herefordshire-cider.