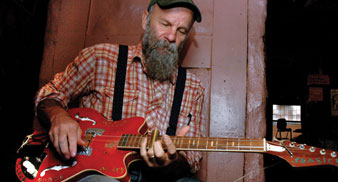 Seasick Steve is to play five live dates in the UK in January, it has been announced today (October 15).

The blues guitarist, who has just released his self-titled major label debut Seasick Steve has been acclaimed by all since he came to prominence in 2007.

The guitarist recently played the biggest venue of his career to date at London’s Royal Albert Hall on October 1, and will now play equally big venues including the Manchester Apollo and London Hammersmith Apollo.