Our special edition gets a deluxe remastering… 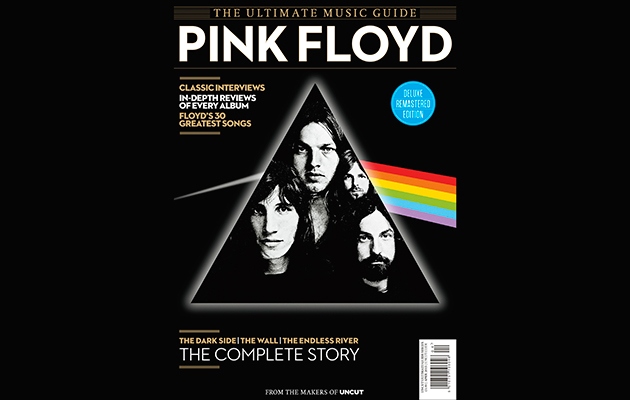 For the past, I think, seven years now, many of you will know we’ve been producing Ultimate Music Guides to complement our monthly editions of Uncut. This week – on Thursday, April 16, to be specific – we’re flinging something else onto the shelves: deluxe remasters of some of our most popular Ultimate Music Guides, beginning with an upgraded and updated version of our edition dedicated to Pink Floyd.

To launch this series of plush new bookazines – as you’ll see when you get your hands on one, they’re closer in feel to books than mags – Pink Floyd seemed the ideal place to start. It’s long been a risky game predicting where the Floyd story might actually finish, and the first edition of the Pink Floyd Ultimate Music Guide felt like it came at the end of, at the very least, a closing chapter, coming as it did soon after David Gilmour and Nick Mason had guested at a Roger Waters London performance of “The Wall”.

In the wake of “The Endless River”, though, a significant arc has been completed, and a critical, previously obscured part of the Floyd story has been brought into view. As David Gilmour sings on “Louder Than Words”, the closing track of what was presented as their valedictory album; “Let’s go with the flow, wherever it goes/We’re more than alive…”

The Ultimate Music Guide to Pink Floyd, then, now tells the complete story of an extraordinary band, a tale that encompasses epic power struggles, intimate confessions, preposterous experiments and, of course, madness, and which stretches back for the best part of five decades. The legend of a great, sometimes oracular British band so potent, in fact, that even their tribute bands play arenas.

There’s a persuasive idea that those tribute bands have been so successful because Pink Floyd themselves are, in a way, anonymous. Who cares about the identity of the musicians playing these awe-inspiring songs, goes the argument: just check out the light show! Uncut’s Ultimate Music Guide to Pink Floyd proves, we think, that this is nonsense. The tale of Pink Floyd is one as human, passionate and compelling as any in the rock canon.

The band’s dramas were played out in the pages of NME, Melody Maker and Uncut, and in the Ultimate Music Guide you’ll find uncut, revelatory interviews conducted with the band between 1967 and 2014. We begin with the brief psychedelic flowering of Syd Barrett, and chart the band’s years of questing until they arrive at The Dark Side Of The Moon. We dive into the intensely personal psychodramas of Roger Waters and the more becalmed stewardship of David Gilmour, and provide in-depth reviews of every Pink Floyd album. We have, of course, added extensive new material on “The Endless River”, to bring the story right up to date.

“Looking through the Pink Floyd songbook surprises me sometimes,” says Gilmour. “There are hundreds of songs, we go through lots of different styles of music, three different leaders and at least three different singers, and dozens of guests. But everything’s linked by this collective psyche. You have a sound in your head and you try to replicate it. I’m always looking for new sounds.”

Interested? The Ultimate Music Guide: Pink Floyd is available now from our online shop. As ever, please let us know what you think when you’ve had a look.