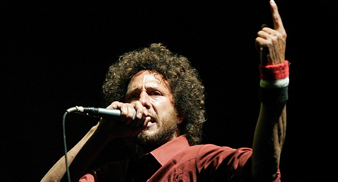 Rage Against The Machine have beaten The X Factor finalist Joe McElderry to the Number One position in the UK singles chart.

Popularity for the track swelled thanks to an internet campaign rallying against Simon Cowell and manufactured pop. A Facebook group, which 980,000 people joined, asked participants to buy ‘Killing In The Name’ throughout last week so it could beat ‘The Climb’ to the top of the charts.

Responding to the popularity of the campaign, Rage Against The Machine promised to play a free UK gig if the track did go to Number One – a pledge they have now maintained to honour.

Guitarist Tom Morello said: “As promised we will play a free concert in the UK in celebration of this incredible upset victory over the heavily favoured X Factor single.”

X Factor judge Simon Cowell, meanwhile, has admitted he is “gutted” that McElderry has been beaten to this year’s Christmas Number One by Rage Against The Machine, though he told the Daily Mirror he was “genuinely impressed by the campaign”.

The Facebook campaign also raised almost £100,000 for the Shelter charity.