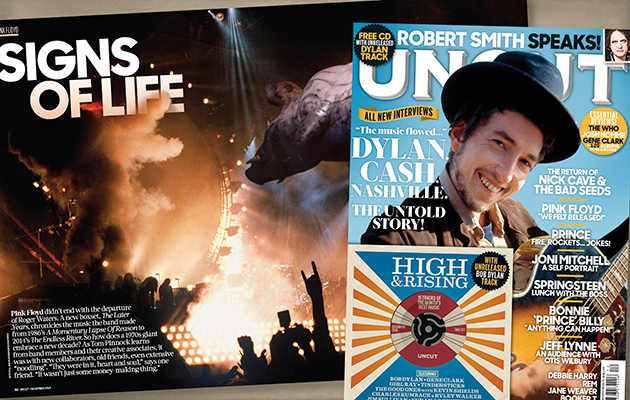 As Pink Floyd gear up for the release of The Later Years box set, the new issue of Uncut – in UK shops now or available to order online by clicking here – features a fresh look at Pink Floyd’s post-Roger Waters years, with contributions from band members and associates.

In December 1985, Waters announced his departure, but Gilmour was keen to begin a new album. The legal wrangling escalated throughout 1986, until Waters took his fight to the High Court in October. As Mason recalls, “I think David led on the idea [of continuing]. It wasn’t that I didn’t want to carry on – I did – but I don’t think I cared as much as David did. We’d be partly in the studios and partly in the lawyers’ office – ‘Was Roger going to injunct?’ And the answer was, of course he couldn’t, because he’d left the band, and  the one thing clear in all our contractual arrangements was that if someone left, they left, and the band continued without them… That gave David and me the authority to carry on.”

In the spirit of continuity, the duo had enlisted The Wall producer Bob Ezrin and begun work at the Astoria in early 1986. It was a risky move, for more than just legal reasons: Waters’ solo tours, featuring a good helping of prime Floyd material, had performed much better than Gilmour’s About Face shows.

“The whole thing was a bit of a gamble,” says Aubrey Powell. “It was naturally daunting to  have the responsibility of carrying on Pink Floyd. I think financially it was an anxious time, too… but David is a very confident person.”

“David was very determined not to be told that he can’t do it any more,” explains Andy Jackson. “In some ways you could interpret Roger saying, ‘There is no more Pink Floyd’ as [from David’s point of view], ‘Well, you can’t tell me that…’ He had the desire to carry on as a band, so he had to make that work really.”

“We were trying to make something that sounded very much of the time,” Jackson continues, “which means of course that as time progresses it ends up sounding dated. As Bob Ezrin was prone to do, at the start of the album  he came in with a stack of CDs and said, ‘This is what’s happening now.’ In ’86, digital was very much at the forefront. [Dire Straits’] Brothers In Arms had just come out and that had a very particular sound, and that was one bar Bob said we should be aiming for.”

“We sort of laid everything  on it,” says Mason. “There was a sense of trepidation over what it would be like without Roger, so we slightly over-egged the pudding  in terms of lots of session players. Some of it’s overproduced, far too much stuff on it…”

“I thought it didn’t really sound like a Pink Floyd record,” says bassist Guy Pratt, who joined the band in 1987 for their live work, “but it was a very good record. It’s very of its time – Floyd were suited to ’80s bombast.”

You can read much more from Pink Floyd in the new issue of Uncut, in shops now with Bob Dylan on the cover.