New Order closed the first night of Open'er Festival in Gdansk, Poland last night (July 4) with a 90-minute greatest hits set, culminating in an encore of Joy Division classics. The appearance marked the Factory records legends' first ever appearance in Poland and had particular poignancy as Joy Division were initially named after Polish capital city, Warsaw. 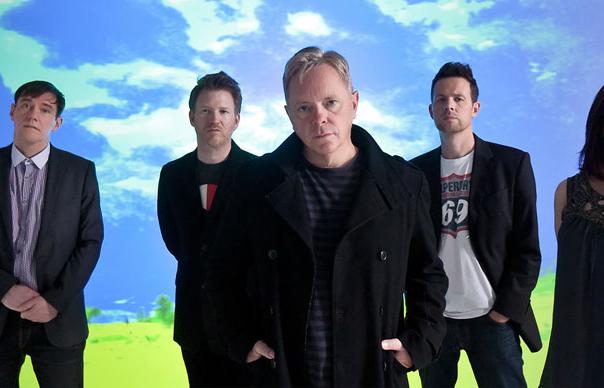 The appearance marked the Factory records legends’ first ever appearance in Poland and had particular poignancy as Joy Division were initially named after Polish capital city, Warsaw.

Coming on stage at midnight, the uniformly black-clad quintet kicked off with ‘Elegia’ – which was written as a tribute to the late Ian Curtis – before storming through a series of crowd-pleasers including ‘Regret’, ‘Ceremony’, ‘Bizarre Love Triangle’ and ‘True Faith’.

Talk between singer Bernard Sumner and the audience was minimal although Sumner was visibly buoyed, dancing around the stage and regularly shouting for the audience to “Come on!”.

Ending with a celebratory double-hitter of ‘Blue Monday’ and ‘Temptation’ (the first, complete with a light show spelling out the track name), the band briefly exited before returning for an encore of two Joy Division tracks, ‘Transmission’ and ‘Love Will Tear Us Apart’ – which was recently named the greatest track of NME’s lifetime.

Speaking before their set, Sumner commented that it was “amazing to see how far the music had travelled” before noting that the ill-fated Polish branch of Factory Records had “clearly done a good job”.

The frontman also spoke of their invitation to support Blur at the forthcoming Olympic closing celebration in Hyde Park, joking that “ever since ‘World In Motion’ people think we’re experts in sport – which, of course, we are”.

Earlier in the evening, Bjork played an incredibly well-attended slot on the main stage, continuing her renewed run of festival gigs following previous throat problems that forced the Icelandic singer to cancel a string of dates.

Drawing largely from last year’s ‘Biophilia’ album and supported by a choir of female vocalists, Bjork – dressed in an increasingly customary blue gown and bright orange hair – delighted with the likes of ‘Crystalline’, ‘Moon’ and ‘Virus’, backed by scientific projections of the related app features. She also showcased a number of classics including a haunting ‘All Is Full Of Love’, ‘Joga’ and a riotous encore of ‘Declare Independence’.

The Kills also played the main stage earlier that day, buoyed by a gospel choir and a troupe of masked drummers. Alison Mosshart – now sporting newly bleached blonde and pink hair – and Jamie Hince were on fine form, rattling through a career-spanning set and inciting a number of mosh pits.