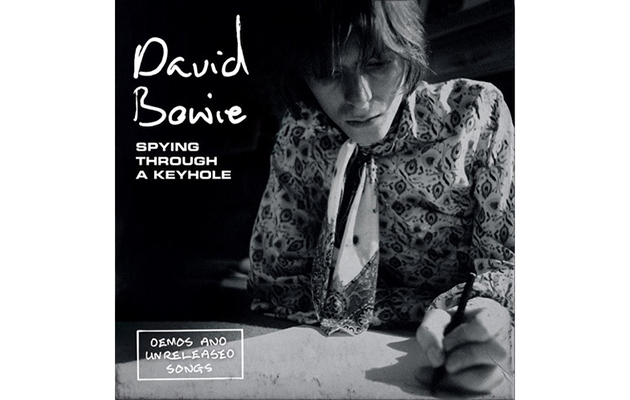 Spying Through A Keyhole comprises nine demo tracks including the previously unknown “Love All Around” and the two earliest known versions of “Space Oddity”. The tracks were initially available on streaming services for a limited period in December, but are previously unreleased on physical formats.

Most of the recordings are solo vocal and acoustic home demo performances. Parlophone have provided some more details on the Spying Through A Keyhole tracks below:

In The Heat Of The Morning (demo)
A well-known early Bowie song but presented here in demo form with final lyrics.

Love All Around (demo)
A delightful love song from whence the title of this collection came: “I see a pop tune spying through a keyhole from the other room”.

London Bye, Ta-Ta (demo)
An early demo version of the song with completely different lyrics in a couple of the verses compared to those of the later full band versions.

Angel, Angel, Grubby Face (demo version 1)
The first and only previously known demo of this song.

Space Oddity (demo excerpt)
The lyric and arrangement variations lend weight to the theory that this is possibly the first ever recorded demo of one of Bowie’s most famous songs.

Space Oddity (demo – alternative lyrics) (with Hutch)
Originally conceived as a song for a duo to perform, this is the first known version to feature John ‘Hutch’ Hutchinson again with lyric and arrangement variations.

Spying Through A Keyhole will be issued as a 7″ vinyl box set later in the spring, exact release date TBC.