The singer says the media have him pegged as 'Mad Morrissey' 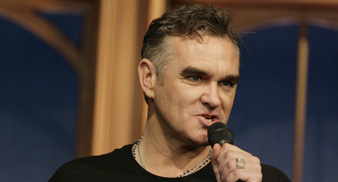 Morrissey has criticized the way information is presented by the modern media, saying that he believes we “live in very dumbed-down times.”

The singer, who is still searching for a record label to release his new studio album, which, despite being complete and ready to go, is still without a release date.

Asked by Clash Magazine about his view of of the modern media, the singer replied: “We live in very dumbed-down times. Everything – news media, music, music magazines – are presented with the assumption that the people as a whole are utterly thick.”

The former Smiths man also accused the media of labeling him as ‘mad Morrissey‘ so they could avoid actually dealing with the content of the comments he makes.

He added: “I think I am officially ‘Mad Morrissey’ now, and everything I say must be ridiculed because that’s one way of not dealing with the contents of the actual comment. With the riots recently the media are obsessed with punishment as solution, but no-one has the intelligence to ask why the people did what they did.”

The singer also spoke his reasons for starting out in a band and said he never wanted to be a musician, but someone who took audiences on a journey.

He said: “I never wanted to be a musician. I wanted to stand upright and sing out. I didn’t want to look down as most people onstage do. I wanted to walk the plank, to dive in, to take it on the chin. I wanted to give too much, like Al Martino or Maria Callas or Edith Piaf or Tom Jones in his mad days. I loved it when singers were so over-emotional that onlookers would feel slightly embarrassed or uncomfortable and then absolutely love it. You very rarely see modern singers or modern groups taking the audience somewhere.”

Morrissey is planning to release his first autobiography in December 2012.