Metallica Inducted Into Rock and Roll Hall of Fame 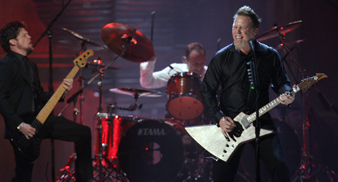 Metallica were joined onstage by former bassist Jason Newsted when they were officially inducted into the 24th annual Rock and Roll Hall of Fame at a ceremony in Cleveland on Saturday (April 4).

The veteran heavy metal band were inducted by Red Hot Chili Peppers’ Flea, who said that Metallica were a ‘perfect match’ for the Hall of Fame.

Flea said “If you’re gonna have a Rock and Roll Hall of Fame … you’ve got to have Metallica in it.”

Frontman James Hetfield said that being honoured in the Hall of Fame was a “dream come true.”

“Dream big and dare to fail … ’cause this is living proof that it is possible to make a dream come true,” Hetfield said.

Other artists inducted this year were Run-DMC, Jeff Beck, Bobby Womack and Little Anthony and the Imperials.