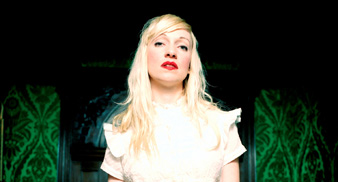 The first news about Massive Attack‘s fifth album has leaked. In the tradition of the faintly ethereal female vocalists favoured by the band, singer-songwriter Stephanie Dosen is currently in the studio working with 3D et al.

Dosen follows in the tradition of such illustrious singers as Tracey Thorn and Liz Fraser as a guest of Massive. On their last album, 2003’s “100th Window”, the band were joined by Sinead O’Connor on three songs.

Dosen came to prominence this year with her winsome debut album, “A Lily For The Spectre”.

She’ll be appearing as a guest on Later. . . With Jools Holland this Friday (November 30).