Kylie To Star In Doctor Who Christmas Special

The pop singer to join David Tennant for filming this month 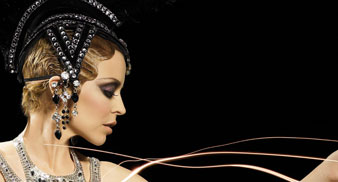 Aussie pop superstar Kylie Minogue is set to return to her acting roots this Winter as the BBC have announced she is to star in the Christmas special edition of hit TV series Doctor Who.

Kylie famously starting out playing the role of Charlene Mitchell in Aussie soap opera ‘Neighbours’, she has gone on to have a massively successful pop career, selling over 40 million albums worldwide.

The pop singer will now appear alongside David Tennant for the special Christmas hour-long episode of Doctor Who called ‘Voyage Of The Damned’.

The episode is to be filmed in Cardiff this month, and from a snippet at the end of series three of the programme, it suggests that the Christmas special will be based around a story concerning the Titanic.

The 39-year-old actress is said to have a lead role in the episode and is ‘thrilled to be joining David (Tennant) and the entire Dr Who production for this year’s Christmas special’.

Click here for the official BBC Doctor Who minisitewww.bbc.co.uk/doctorwho