Our latest special edition goes on sale this Friday 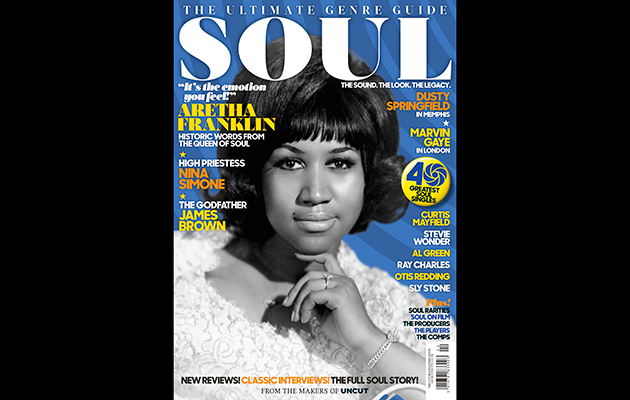 In the current issue of Uncut, Sam Moore – one half of the Stax R&B duo Sam & Dave – reflects on the qualities he most admired in his lifelong friend, Aretha Franklin. “Part of what made her great,” he tells Stephen Deusner, “was the struggle, the hurt, the pain she endured. She took it all up on the stage with her. Some of us in the industry, we would turn to drugs or alcohol or maybe even suicide, but she took it all up on stage and became greater than the greats.”

Stephen’s piece wraps together her life as a singer, activist and icon – it’s a fitting tribute, I humbly hope, for a remarkable artist. For further reading, please allow me to steer you towards the latest title in the Uncut family: the Ultimate Genre Guide to Soul, on sale from Friday but you can buy a copy form our online store here. And here’s John Robinson, our one-shots editor, to tell you more about it…

My copy of Aretha Franklin’s Lady Soul, (like, I expect, a lot of records from the era of classic soul), isn’t in the best of shape. On the surface it presents a solid face to the public, but if you peer closer the façade cracks a little. If you were looking to complete a collection with a museum-quality artefact, this definitely wouldn’t be the place to start.

As with my Hot Buttered Soul, What’s Going On or, in particular Otis Blue (don’t ask), it’s a record which saw its share active service even before it arrived in the after-market with me. That surely tells you a story about something much more than collecting records. Rather it’s about something that reaches deeper, into how this magnificent music was enjoyed then, and continues to be cherished now. The records hold truths which survive, intact in all the essential ways, down the decades.

With the recent passing of Aretha Franklin, it’s this enduring quality that’s been very much on our minds, and which we celebrate with this latest Ultimate Genre Guide. Like Aretha, Isaac Hayes, Marvin Gaye, Otis Redding, Nina Simone and Dusty Springfield are all sadly no longer with us, but their work is celebrated here, and continues to demand repeated listening.

Aretha herself, as interviewed in the archival feature you’ll find inside, wasn’t the kind of person to theorize about her art but she felt that her music on some level derived from the bitterness of her experience. “I’ve been hurt bad,” she confesses.

It was an “authentic” line which critics at the time pursued rather doggedly. On the back of Lady Soul, Rolling Stone’s Jon Landau’s sleevenote pursues the album’s spontaneity, electrifying performance and dynamic arrangement through the country and urban blues, perhaps in the hope of tracing the source of her genius.

While writers in this magazine have an ear and an eye for quality, for arrangement and performance, for great music, they are not about imprisoning the music in notions of authenticity. In the new pieces here, you’ll find writers elucidating how a feature of soul music is its resistance to definition. That might mean Nina Simone’s interpolation of classical music and jazz into her composition. Equally it could mean Stevie Wonder’s embrace of technology.

In a more anecdotal sense, it has also come to mean Marvin Gaye’s troubled relationship with his record company (and with his ex-wife; and with himself). Berry Gordy’s practice of introducing some of the “production line” ethos of Detroit into the music he wrote, produced or released through his Motown label birthed classic music, but for Gaye the institution became restricting to his vision, his battle for creative control just one of many such stories behind the music here.

By the time Paolo Hewitt met Gaye for Melody Maker in 1981 – a piece you can read inside – the arguments between artist and label have become so baroque in their complexity that Gaye is on the point of disowning his own work.

Happily, our own relationship with this music isn’t quite so complex and freighted with problems. Historic, but timeless, it reaches out to us now, just as powerfully as it ever did.