Introducing The History Of Rock 1977

Plus join in with the SydArthur Festival, and grab a bargain new subscription to Uncut... 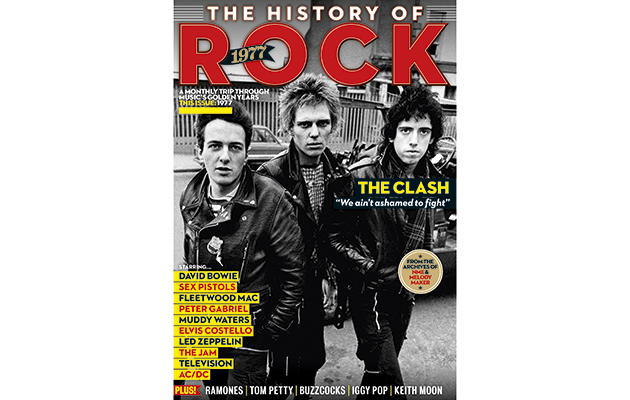 A couple of things happening on Thursday (July 7). First is the arrival of our History Of Rock volume for 1977. It’s the one with The Clash on the cover, and you can order a History Of Rock 1977 from our online shop now.

The second thing is the beginning of an auspicious new event on the calendar: The Syd Arthur Festival, which runs from July 7 until August 3; the dates when Syd Barrett and Arthur Lee died ten years ago. The organisers – Julian Cope, Dorian Cope and Avalon Cope – promise the “ultimate psychic rock’n’roll festival”. “No pricey tickets, no camping like sardines in some infernal swamp,” they write. “For those who choose to engage in these proceedings, they may do so from their own home, favourite areas, but most specifically from within their own minds.”

A great idea, I think, and one which you can find out more about by visiting www.sydarthurfestival.com. Get ready for July 16: “Today, let’s search out Edie Sedgwick and Gerard Malanga dancing to the 13th Floor Elevators’ ‘You’re Gonna Miss Me’ and join them.”

In the meantime, here’s the intro to that aforementioned new History Of Rock 1977, courtesy of John Robinson…

“Welcome to 1977. After the widely-publicized stirrings of the Sex Pistols at the close of 1976, punk rock has now become more than a media sensation. It is a widespread discussion, talked about in political, and increasingly even in musical terms. Bands like the Clash, Stranglers and Sex Pistols are even releasing albums.

“Mick Jagger has checked out the bands in New York and listened to the singles (‘Chelsea, “Right To Work” – that one’s awful’). Keith Moon makes a riotous trip to The Vortex club, to confront punk rock head on. Robert Plant, who has seen the Damned at the Roxy, is unconcerned. ‘The dinosaurs,’ he memorably says, ‘are still dancing…’

“Still, they are a little on the defensive side. Plant seems anxious to downplay punk’s youth, claiming Rat Scabies and Johnny Rotten are older than they look. They’re not – indeed Plant himself is only 28 – but generationally-speaking he may as well be a cabinet minister. He is professionally expert and enormously wealthy, but in this changed musical economy, this only contributes to his irrelevance.

“His discomfort is not soothed by the press. Punk doesn’t only politicize youth and revolutionize how records are made, it also effects change in music papers, which become bolder in layout, more irreverent in tone. Features by staff writers like Tony Parsons contain important interviews with bands like our cover stars The Clash – but these only support the main thrust of his communiqué.

“This is the world of The History Of Rock, a monthly magazine which follows each turn of the rock revolution. Whether in sleazy dive or huge arena, passionate and increasingly stylish contemporary reporters were there to chronicle events. This publication reaps the benefits of their understanding for the reader decades later, one year at a time. Missed one? You can find History Of Rock back issues here (Worth mentioning that we’ve finally got copies of the first issue, History Of Rock 1965, back in stock if you’re missing that one).

“In the pages of our 13th edition, dedicated to 1977 and on sale in the UK this Thursday, you will find verbatim articles from frontline staffers, filed from the thick of the action, wherever it may be. In court with Keith Richards. Looking at the Westway with the Clash. Being called a wanker with Keith Moon.

“It is Moon, in fact, who best articulates the anxieties of his generation of musician in 1977 when he reveals to a young punk in the Vortex a simple biographical fact.

Oh, and before I go, we have some kind of summer sale thing going on for subscriptions to Uncut magazine. Have a look here and make the most of an opportunity to get hold of Uncut at a hefty discount…