The man who inspired Paul Simon, Shirley Collins and John Martyn has died aged 68 from cancer 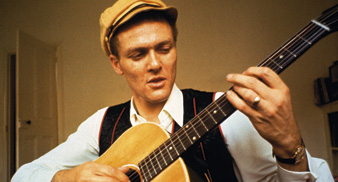 Davy Graham was so much more than just an expert guitarist. To the leading lights of the British folk revival in the ‘60s, Graham was a pioneer, a visionary who opened up whole new possibilities for acoustic music. Pentangle guitarist John Renbourn acknowledged as much: “Back in the ‘60s he was so far ahead of just about any would-be picker that it was practically miraculous…we all owe him a huge debt.” Indeed, without Graham’s brace of early classics – Folk, Blues & Beyond (1964) and Folk Roots, New Routes (1965), with Shirley Collins – it’s likely there would have been no Pentangle and no Fairport Convention. Bert Jansch called him “my absolute hero, always will be”, John Martyn wanted to be him and a young Paul Simon asked Graham to join him pre-Garfunkel. By then though, Graham was beating his own trail.

He was born to Scottish-Guyanaese parents in Hinckley, Leicestershire. As a teenager he was seduced by the music he heard on his travels to Morocco (“He’d made the fabled journey down to Tangiers when the rest of us still had our sights set on Brighton pier,” quipped Renbourn). These nomadic flights fed directly into Graham’s own music, blending together jazz, folk and Arabic influences. His deft fingerpicking and unique DADGAD tuning, adapted from jamming with North African Oud players, lent this work its own baroque style.

Those who saw him play at Soho folk den Les Cousins at the turn of the ‘60s described Graham’s shows as revolutionary. 1962’s “Anji”, written when he was just 19, became an acoustic benchmark, soon covered by Jansch and, four years later, by Simon & Garfunkel on Sounds Of Silence. Jimmy Page was a disciple too, lifting Led Zeppelin’s “White Summer” from Graham’s raga rework of “She Moved Through The Fair”.

But Graham’s own personality was as mercurial as the music itself. It was a trait that exasperated concert promoters. One time, en route to an Australian tour, Graham left the plane during a stopover in Bombay, spending the next six months wandering through India instead. Problems with drugs, particularly cocaine, led to erratic performances later in the decade, quickening his journey into ‘70s/’80s obscurity and relative poverty.

BBC Four’s Folk Britannia series brought Graham back into the public consciousness in 2006, with a new album, Broken Biscuits, released a year later with musician Mark Pavey. As for his legacy, Roy Harper recently said: “Dave was the leader. He was the first one. He was the beginning of the style.”