You can hear Arcade Fire's new track 'Abraham's Daughter', which is taken from the soundtrack to the new fantasy film The Hunger Games, by scrolling down to the bottom of the page and clicking. 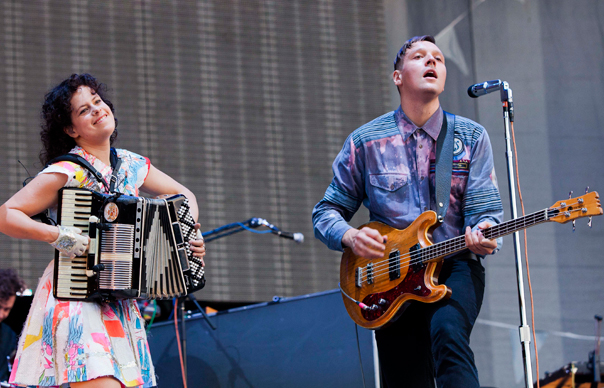 You can hear Arcade Fire‘s new track ‘Abraham’s Daughter’, which is taken from the soundtrack to the new fantasy film The Hunger Games, by scrolling down to the bottom of the page and clicking.

The track will be play over the dystopian thriller’s closing credits and was recorded by the Canadian band last month. The film itself will also feature a track titled ‘Horn Of Plenty’ which has been written and recorded by Arcade Fire’s Win Butler and Regine Chassagne.

Speaking to Entertainment Weekly about the track, Arcade Fire frontman Win Butler said: “Our whole approach was to get into the world and try to create something that serves the story and the film. There’s something in the story of Abraham and Isaac that I think resonates with the themes in the film, like sacrificing children. So we made a weird, alternate-universe version of that.”

He said of this: “We were interested in making music that would be more integral in the movie, just as a mental exercise. And there’s an anthem that runs throughout the books, the national anthem of the fascist Capitol. So as a thought experiment, we tried to write what that might sound like. It’s like the Capitol’s idea of itself, basically.”

Butler continued: “It’s not a pop song or anything. More of an anthem that could be playing at a big sporting event like the Games. So we did a structure for that, and then James Newton Howard made a movie-score version of it that happens in several places in the film.”

Taylor Swift, The Decemberists, Kid Cudi and The Low Anthem wil also feature on ‘The Hunger Games: Songs From District 12 and Beyond’.

The Hunger Games is set to be released on March 23 in the UK and stars Winter’s Bone actress Jennifer Lawrence, Woody Harrelson and Elizabeth Banks.