But the unpublished songs are still not recovered 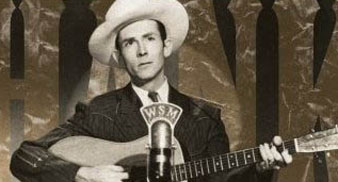 Hank Williams’ stolen notebook containing up to 20 unpublished songs, and worth an estimated £130,000, has been found in the hands of two memorabilia collectors in Tennessee.

The book, which contains lyrics written between 1947 and 1949, has been missing for nearly 60 years.

Owners of the notebook, Sony/ATV Publishing, only realised the country legend’s book was missing in September this year when a news report in the Chicago Sun-Times alleged that Steven Shutts and Robert Reynolds, memorabilia collectors had it.

The pair, who run a travelling exhibition called the “Honky Tonk Hall of Fame”, are not accused of stealing the book but could be charged by Sony/ATV Publishing for possessing stolen goods.

Hank Williams, a huge influence on Bob Dylan, died in 1953 after achieving fame with songs like “Your Cheating Heart”.