Wizard of Oz is back on the big screen 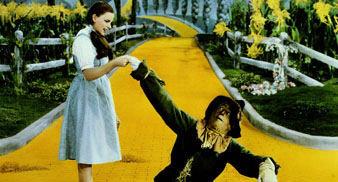 A cleaned-up and digitally restored version of Hollywood classic The Wizard of Oz, is being released next month at cinemas in the UK.

The 1939 film was one of the most expensive films ever made at the time at a cost $2.7 million, but the negatives starting deteriorating soon after its cinematic release.

Artists have been working at Warner Bros Studios for the past eight months to remove dirt and scatches from the original three-strip Technicolour negatives. It took 250 hours just to clean the dust of them.

They BFI also say that the film looks as stunning as the day it originally opened and that the yellow brick road is yellower than ever.

The three times Oscar winning film opens at around 40 cinemas at cinemas around the UK.