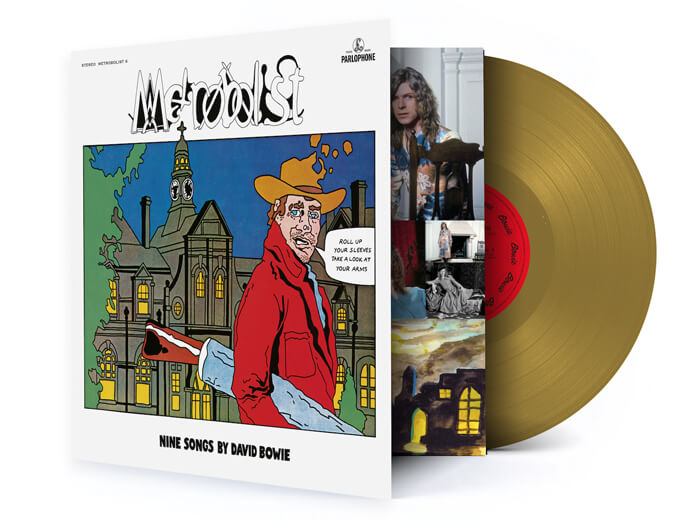 For its 50th anniversary in November, David Bowie’s The Man Who Sold The World album will be reissued under its original working title, Metrobolist.

First released in the US in November 1970, the album’s name was changed at the last minute to The Man Who Sold The World – the original stereo master tapes were in fact labelled Metrobolist, with the title ultimately crossed out.

The Metrobolist 50th anniversary artwork has been created by Mike Weller who was behind the originally intended album artwork which Mercury refused to release (although the US sleeve was based on his design). The gatefold sleeve also features many images from the infamous Keith MacMillan Mr Fish ‘dress’ shoot at Haddon Hall used on the cover of the The Man Who Sold The World when it was released in the rest of the world in spring of 1971.

Speaking in 2000, Bowie said of the sleeve imagery: “Mick Weller devised this kind of very subversive looking cartoon and put in some quite personalised things. The building in the background on the cartoon in fact was the hospital where my half brother had committed himself to. So for me, it had lots of personal resonance about it.”

The 2020 rerelease has been remixed by original producer Tony Visconti, with the exception of “After All” which is featured in its 2015 remaster incarnation. As well as a 180g black vinyl edition, Metrobolist will come in 2020 limited edition handwritten numbered copies on gold vinyl and on white vinyl, all randomly distributed.

The remixed album will also be available for streaming and high-resolution download.