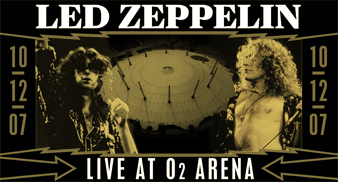 Led Zeppelin are due to headline the tribute to Ahmet Ertegun concert is tonight (December 10), with the legends due to perform at 9pm (GMT).

The band, comprising the three original members of Jimmy Page, Robert Plant, John Paul Jones will be playing a two-hour set with Jason Bonham, the late John Bonham’s son on drums at the reunion show which takes place at London’s O2 Arena.

The show is due to start at 7pm, with the running order yet to be confirmed, though uncut.co.uk will be bringing you the build up from inside the O2 Arena from 5pm today.

Stay tuned as tonight we’ll be bringing you news reports throughout the night, including a live blog of what tracks Led Zeppelin perform.

The songs have been a closely guarded secret, though the band have already promised us there will be some set list surprises!

Meanwhile in conjunction with our sister title nme.com there’s still time for you for your ultimate Led Zep rock tracks.
Just head to the special vote page here: Rate The Song and rate which songs you’d like to see the band play! We’ll be publishing the final results ahead of tonight’s highly anticipated gig!