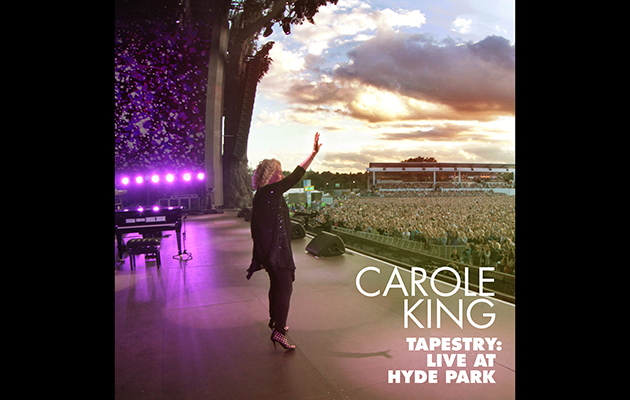 Carole King‘s concert from Hyde Park on July 3, 2016 is to be released on Friday, September 1.

Tapestry: Live At Hyde Park features King’s first-ever live performance of her 1971 album in its entirety alongside other songs from King’s body of work, including “Take Good Care of My Baby”, “It Might As Well Rain Until September”, “Go Away Little Girl”, “I’m Into Something Good” and “One Fine Day”.

The Carole King – Tapestry: Live at Hyde Park package includes the full concert on CD/DVD plus interview material about the making of Tapestry.

Carole King – Tapestry: Live at Hyde Park will be released on CD, DVD or digitally by Legacy Recordings and Rockingale Records.

CD tracklisting:
I Feel The Earth Move
So Far Away
It’s Too Late
Home Again
Beautiful
Way Over Yonder
You’ve Got A Friend
Where You Lead
Will You Love Me Tomorrow?
Smackwater Jack
Tapestry
(You Make Me Feel Like) A Natural Woman
Medley Intro
Goffin/King Medley:
Take Good Care Of My Baby
It Might As Well Rain Until September
Go Away Little Girl
I’m Into Something Good
One Fine Day
Hey Girl
Chains
Jazzman
Up On The Roof
Locomotion
I Feel the Earth Move (Reprise)
You’ve Got A Friend (reprise)