The Black Keys: “You can’t be best friends with the person you’re in a band with”

The duo discuss their brotherly bond in an exclusive Uncut interview 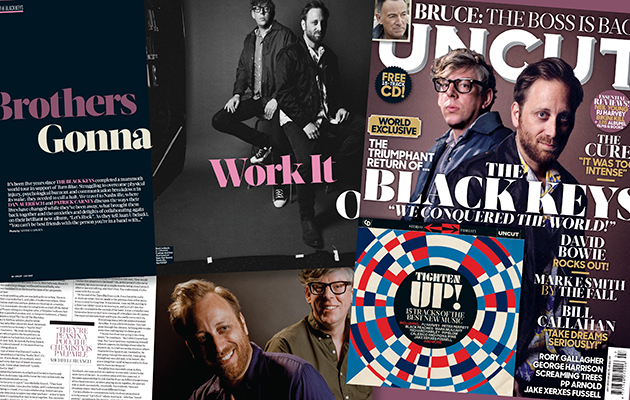 The new issue of Uncut – in shops now or available to buy online by clicking here – features a frank and wide-ranging interview with dynamic rock duo The Black Keys.

As well as breaking down the reasons for the long hiatus between 2014’s Turn Blue and their upcoming new album “Let’s Rock”, Pat Carney and Dan Auerbach candidly dissect their own relationship, and why it’s remained so strong and productive through high times and low.

“You can’t be best friends with the person you’re in a band with,” says Carney. “It might start off that way, it might get close to it… But I’m more of a family member. Looking back, that’s when I wanted to call [our 2010 album] Brothers – because at the time it got a little tense, when he put  out a solo record. My attempt to rationalise this was, ‘How would  I define this situation in the band?’ Oh, at this point it’s like we’re brothers, because we can go a couple months being pissed at each other or just not talking, and that’s fine.

“At the end of the [Turn Blue] tour cycle, I was forced to really re-evaluate what choices I made in the previous four or five years.  It was a crazy fucking time. It was insane. I saw my life moving in  a direction I didn’t want to be moving in, and part of it was like directly correlated to the success of the band. It was a stressful time… So being able to take some time and regroup has been good.”

“I think the best albums The Black Keys make are when we’ve had a lot of time off… It cleared my mind and  it made it so much more enjoyable when I got back together with Pat. We’d had all that time off and there wasn’t any of that stale, we’ve-been-on-stage-doing-this-shit-over-and-over-and-over-again thing. It was more like, ‘What a cool-ass drummer Pat is!’ I got reminded again how awesome he is. It felt very fresh and that would’ve been impossible if we hadn’t taken that time off. The [new] record is a testament to that feeling.”

You can read much more from The Black Keys in the new issue of Uncut, out now.